Residents have started moving in to the first ever development in the UK to have British Gypsum’s pioneering and robust partition walling system – a system that has been accredited by Secured by Design (SBD), the national police crime prevention initiative.

It’s been piloted in the party walls at a London & Quadrant (L&Q) development of 61 affordable and intermediate rent housing apartments on the site of the former swimming baths in High Street, Erith, Kent, fronting the Thames estuary.

The GypWall Quiet system resulted from talks between SBD and British Gypsum, together with developers and installers about a walling system that could address a number of issues. These included lack of test evidence to meet security requirements; the complexities of installation involving a number of different components and different approaches to detailing; and the on-site cutting and handling risks of components, such as metal and mesh. 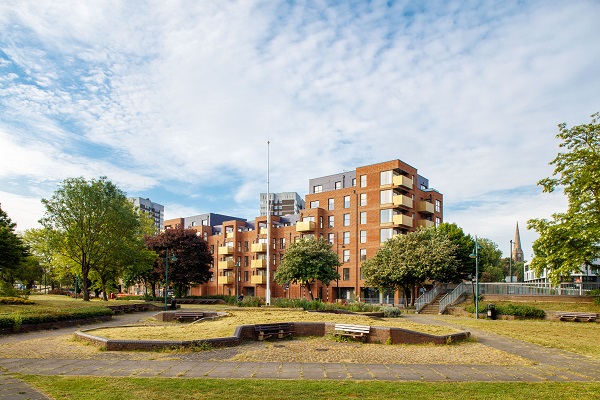 The GypWall Quiet system is the first lightweight partition system available on the market to meet the SBD attack requirement after being tested and certified to the STS 202 BR1 attack standard by an independent, third-party UK Accreditation Service (UKAS) certification body.

British Gypsum and SBD have also worked together on an Approved Installer course to ensure correct installation.

Lyn Poole, Development Officer, SBD, said: “There emerged a real opportunity and desire to work in partnership to achieve a standardised approach to a walling system, which met security, fire and acoustic standards and make it available in a single package.

“We all wanted to bring a fully-tested solution to industry to give everyone confidence in what was out there,” explained Lyn.

Paul French, British Gypsum’s Systems Lead: Division of Space, said: “British Gypsum strives to develop partition and ceiling systems that improve the built-environment for users across all building types, so we didn’t take much convincing when approached to develop a partition system that would deliver security performance, as it was reflective of our corporate vision: ‘creating room for better living’.

“Listening to the problems sites were facing when installing high security partitions, it soon became clear that there was a great opportunity for British Gypsum to develop a partition system that was consistent in design, easy to install, with test substantiation for security, fire and acoustic performance.

“An obvious starting point was to upgrade the robustness of our GypWall Quiet system, with the inclusion of our high-strength plasterboard, Gyproc Habito®. A new entrant to the market at the time, Gyproc Habito® enabled the partition to comfortably pass STS 202 BR1 as required by the SBD Homes Guide, whilst also achieving excellent fire resistance and sound insulation performances: an industry first.”

“Taking on board the feedback from installers, our SBD approved system is consistent in design, symmetrical – meaning that robustness is equal from any attack direction, while reducing the number of components involved as plywood or metal lath are not required. As an added bonus Gyproc Habito® provides enhanced fixing capability when compared to traditional plasterboard, meaning that TVs, shelving and pictures can be fixed securely, directly into the board. Feedback from both the installers, the developer from Erith Baths and subsequent construction projects has been extremely positive,” explained Paul.