A Cambridgeshire member of police staff has received a Secured by Design Dedicated Service Award on her retirement, a testament to her excellent work as a both a Crime Prevention Officer and a Designing Out Crime Officer.

Carol Aston joined Cambridgeshire Constabulary in 2005 as a Crime Prevention Officer, becoming a Designing Out Crime Officer (DOCO) in 2007 where her work included advising planners, developers and architects to adopt appropriate security recommendations and use police preferred products accredited by Secured by Design to design out crime at the early design stage of new developments.

In addition Carol project managed the Safer Streets projects for Cambridgeshire after a successful funding bid via the Police and Crime Commissioner’s Office which resulted in over £450,000 from the fund being allocated to the county to reduce burglary and neighbourhood crime.

Carol has been involved with a lot of charity work over the years and helped many local people in Ramsey during the last 18 months through the pandemic. She led a team in setting up the ‘Ramsey Area Covid-19 support’, a group of around 60 volunteers who undertook tasks such as collecting prescriptions, cutting grass and doing food runs for vulnerable residents in Ramsey.

Carol’s charity work resulted in her being awarded the British Empire Medal (BEM) in the Queens recent Birthday Honours list. 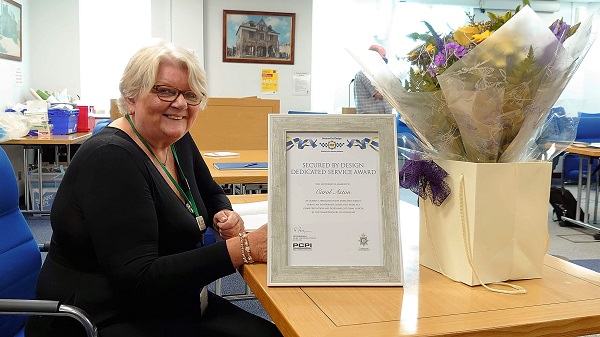 Strategic Designing Out Crime Officer Heather Gurden said: “I am delighted that Carol has received this award in recognition of her fantastic work. Over many years she has provided a consistent level of support towards her Crime Prevention and Designing Out Crime Officer colleagues in the delivery of their work, and her passion, dedication and commitment could always be relied upon to motivate and encourage others.

“Carol was always available to lend a helping hand when needed and was incredibly generous with her time to enable Police colleagues and community safety partnerships to deliver effective crime prevention measures in many aspects of their work.

“Carol is kind-hearted and always willing to share her knowledge and expertise with others, providing them with sound advice, guidance and reassurance. She has been a hugely valued member of our Eastern Region team and I wish her every success in her retirement”.

Guy Ferguson, CEO of Police Crime Prevention Initiatives, said: “Carol has made a huge contribution to community safety in Cambridgeshire and I am delighted to present this award to her acknowledging her dedicated service to crime prevention.

“Carol has never failed to provide support and guidance to colleagues who have found themselves in need of extra help and her work designing out crime has resulted in a legacy of safer, vibrant communities, where people want to live, visit and where business thrive”.