Jones Building Group has been presented with the Secured by Design (SBD) Gold Award for incorporating police crime prevention measures into the layout and landscaping as well as the physical security of buildings at a new home development in Bournemouth.

The development was built for Bournemouth Borough Council, which requires all of their new homes to reach SBD standards for physical security, such as doors, windows and locks. However, the development in Cheshire Drive went one step further to incorporate proven crime prevention techniques into the built environment too, such as natural surveillance and defensible space to deter criminal activity.

The Award – SBDs highest for crime prevention in new build developments – is the result of a close working relationship from the drawing board stage through to construction between the Jones Building Group and Dorset Police.

Independent academic research shows that SBD developments that include crime prevention techniques in the built environment and accredited products like doors and windows can reduce crimes like burglary by up to 75% in new-build homes and up to 63% in refurbishments. Evidence suggests these figures are sustainable year-on-year and represent a significant reduction especially as most SBD developments are in social housing in deprived areas.

SBD has Bronze and Silver Awards to recognise police security standards have been achieved in refurbishments and new home buildings respectively.

SBD trained designing out crime specialist, John Green, of Dorset Police, presented the Gold Standard Certificate to Site Manager Geoff Lawrenson a week before the keys to five new build properties were due to be handed over to the client.

John said: “These homes were designed on behalf of Bournemouth Borough Council as social housing. I am very pleased that they have taken the positive step of asking for Police advice from the outset to try and design out crime and place security as a priority.

“I have collaborated with the architects and developers since the early stages on this site. By them responding positively to my advice it means that this development has gone on to achieve Gold Standard Certification. This willingness to consider security from an early stage will result in better and safer sites for residents.”

Martin Higgins, Construction Manager at Jones Building Group, added: “We are very pleased to have achieved this award. We always look to have a level of security built into our projects and in this case it was required, but the team went the extra mile to work with Police to achieve the highest standard for the new residents.”

Jones Building Group has stated that it is looking forward to working with SBD on future projects to achieve these high standards.

SBD, the national police crime prevention initiative, seeks to achieve sustainable reductions in crime through design and other approaches to enable people to live in a safer society.

SBD Designing Out Crime Officers or equivalent work closely with Local Authority planners, architects and developers from drawing board stage through to construction to ‘design out crime’ using proven crime prevention techniques in layout and landscaping and building security in a range of sectors including housing, commercial, mixed use, retail,  transport, health, education, leisure and others.

Falling crime brings less demand on Police and Local Authority resources and use of police accredited products means less maintenance – freeing up budgets for other priorities. 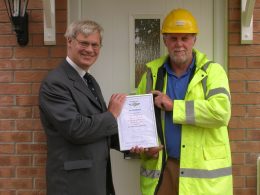