Sutton’s Slug and Lettuce has become the first venue in the borough – and one of the first in London – to receive the first ever National Policing Award for safety and security.

Licensing SAVI encourages venues to improve their management practices and operational security year on year using an online self-assessment, which includes all the police and council licensing information that venues need to meet statutory licensing requirements for safety and security. Venues can be awarded a star-rating and apply for Licensing SAVI accreditation.

The Slug and Lettuce, an established venue which enjoys a prominent position in the High Street, close to the local rail station and bus routes, has achieved its Licensing SAVI Award and Accreditation which shows the efforts undertaken to make the venue safe.

The Slug and Lettuce is part of Stonegate Group, the UK’s biggest pub company.

Samantha Sears, General Manager of Slug and Lettuce, Sutton, said: “I am delighted with this award. The safety and well-being of our guests and staff is our top priority and to be the first venue in the area to be recognised in this way is a fantastic achievement.

“As part of the largest, national pub company, we work with many initiatives and authorities to ensure our customer experience is the best it can be,” said Samantha, who is pictured below (second left) with her Area Manager Jenny Mitchell, Superintendent Andy Brittain and Guy Ferguson of Police CPI.

Leading the borough’s support for Licensing SAVI has been Patricia Park, BID Manager, Successful Sutton, who is offering to fund the roll out of Licensing SAVI for up to 12 licensed venues in the town centre.

Patricia, who has been raising awareness of Licensing SAVI locally at Pubwatch meetings, said: “Successful Sutton the Town Centre Business Improvement District is happy to support our night-time economy businesses with this important safety audit. We are pleased that venues like The Slug and Lettuce are getting on board with the scheme to ensure they are operating safely not only for their patrons but also their staff.

“Sam and her team at the Slug and Lettuce have done a fantastic job! The BID is happy to sponsor this training for all our town centre night-time venues and we encourage everyone to participate in the scheme.”

Superintendent Andy Brittain, of Sutton Police Station, said Licensing SAVI is an important part of a number of measures to ensure that Sutton remains one of the safest boroughs in London.

“It’s important that we work in partnership with businesses to make our town centres safe for shoppers and other visitors throughout the year – and Licensing SAVI is one of a number of initiatives and measures we are continuing to support, such as Street Pastors and effective taxi queue management as well as improved CCTV and lighting.”

Supt Brittain said the Metropolitan Police is working on a London-wide action plan to support the Government’s ‘Violence Against Women and Girls’ agenda – a term which refers to acts of violence or abuse that disproportionately affect women and girls – and to improve feelings of safety in the night-time economy.

In 2020/21, the Met recorded more than 19,000 allegations of sexual offences (including 7,700 rapes and 8,000 serious sexual offences). In addition, a recent report by UN Women UK found that 97 per cent of women aged 18-24 have been sexually harassed, with 96 per cent not reporting those situations because of their belief that it would not change anything. 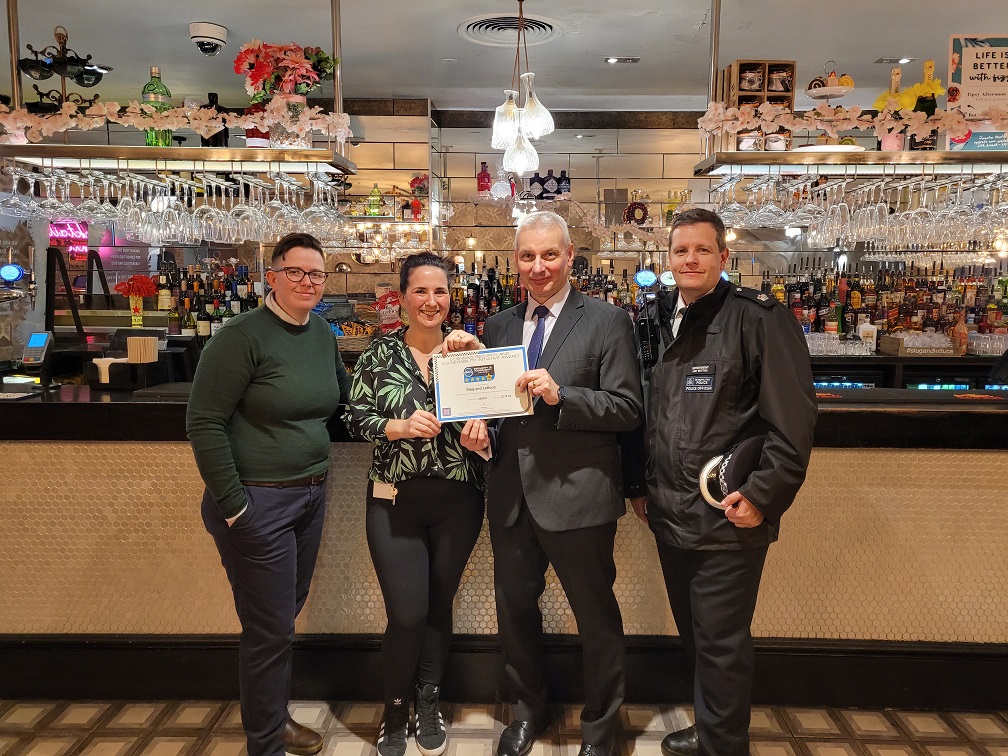 Mark Morgan, Business Manager of Licensing SAVI and a former Police Superintendent, said: “This Award is testament to the Slug and Lettuce wanting to be a safe and secure venue.

“We are keen to work with any licensed premises and organisations that have an interest in building safer communities so we are thrilled to have brought Licensing SAVI to Sutton, which is a borough with a long and successful record of partnership working. We hope other venues will be quick to support it too and reap the many business benefits of being known as a safe place to visit and enjoy,” he added.

Licensing SAVI was developed at the request of the Home Office by Police Crime Prevention Initiatives (Police CPI), a not-for-profit police organisation, which works alongside the Police Service throughout the UK to deter and reduce crime. Licensing SAVI is supported by the National Police Chiefs’ Council and Project Servator, an anti-terrorism initiative.

Guy Ferguson, Chief Executive Officer, Police CPI said: “It is clear from the adoption of this initiative that Sutton has a strong desire to offer safe high quality entertainment venues for people to come to and enjoy themselves. As a former Police Borough Commander and longstanding Sutton resident I welcome this initiative and applaud the Slug and Lettuce and the Successful Sutton BID for being enthusiastic early adopters. It bodes well for the future of Sutton.”

YouGov research commissioned by Police CPI of 5,050 adults aged 18-45 in England between 16 August – 5 Sept 2021 were asked about safety in licensed premises with safety defined as ‘where efforts have been made to prevent crime, reduce harm and where staff will support you if you are feeling vulnerable’.

Asked whether they agreed with the statement that ‘recent publicity around the safety of women and girls has made it more important for licensed premises to improve their safety procedures’, a total of 79% of adults agreed that want safety improvements in nightclubs whilst 76% want improvements in bars and pubs. Support was greatest among women with 83% wanting improved safety in nightclubs and 81% of women in bars and pubs.

Stonegate Group
Following the acquisition of Ei Group on 3rd March 2020 for £1.27bn, Stonegate Group is the largest pub company in the UK. Its portfolio is comprised of 1,270 sites within the managed division and 3,200 leased and tenanted businesses.
The managed pubs division, which employs 13,500 people, is split into Branded and Traditional pubs. Branded is comprised of: Slug & Lettuce, Walkabout, Be At One and Venues. Traditional (unbranded) pubs are made up of: Proper Pubs, Town Pub & Kitchen, Classic Inns, Common Room and Craft Union.

Police CPI
Police Crime Prevention Initiatives (Police CPI) is a police-owned, not-for-profit organisation which delivers a wide range of innovative and ground-breaking crime prevention and demand reduction initiatives to support the UK Police Service, Government and the public. Senior police officers from England, Scotland and Wales control and direct the work Police CPI carries out on behalf of the Police Service. Visit: https://www.policecpi.com