Robbery is a crime against people and its effect on an individual can be long-lasting.

Across 1000s of shops installed throughout the UK, over the last 5 years, Fog Bandit has successfully thwarted 34 robberies without any injuries to the people exposed to what is typically a most frightening experience. Most importantly, NO activation failures have ever been experienced, proving the incredible dependability of the Bandit system.

In the majority of cases there have been no stock losses or just minor losses in a few instances. These incidents have taken place across the UK, including Hampshire, West Sussex, Surrey, London, Middlesex, Berkshire, Birmingham, Lancashire, Cheshire, Yorkshire and Glasgow.

Confidence in the Fog Bandit, knowing that the system will work instantly when required, has helped empower staff to protect themselves and their businesses by creating an element of control in an otherwise control-less and shocking encounter. The Bandit UK Team applaud the staff during all of these incidents for acting promptly in initiating the Fog Bandit and forcing the raiders to leave their shops.

This consistent success at foiling robberies has been achieved by establishing and maintaining the following objectives, as a best practise approach:

Rapidly removing the criminal’s access to assets and has negated or minimized stock loss and damage to property.

Our aim is to communicate a clear deterrent message to the criminal fraternity: that targeting premises with a Fog Bandit system installed, is a fruitless exercise and heightens the likelihood of being caught. 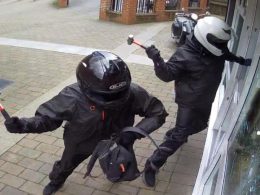 "Our security measures in place stopped the raiders entering the shop. Nobody was hurt, we did not suffer any loss and the shop is open for trading. Without the quick thinking of our vigilant staff and the deployment of the Fog Bandit the outcome could have been very different."

"All security procedures were followed by our quick thinking staff, resulting in no-one being hurt from our store or any stock being taken. Laings thank everyone for their concern and well wishes. Our security system is Fog Bandit and was installed by our alarm company Pointer."

"The Fog Bandit worked perfectly! Nobody was hurt, we did not suffer any loss and the shop was back open the very next morning for Christmas trading. Without the Fog Bandit the outcome could have been very different. We feel assured by having the Fog Bandit installed and strongly suggest that other retail Jewellers do the same.”

"Well your Fog Bandit worked brilliantly! We had four armed robbers who attacked the window from inside with axes and sledgehammers and two of the girls hit the buttons and they were off. The inside glass is also armoured so they didn’t get away with anything. Pleased to say the Police caught all five of them in Pulborough within an hour and a half."

"The Fog Bandit really did its job with the robbers fleeing immediately and empty handed as soon as the system was activated. We would recommend any luxury goods store to protect their stock and staff by getting a Fog Bandit system installed."

"The Fog Bandit and its voice warning announcer did its job in quickly driving the raiders out of the shop, restricting the time and opportunity for the raiders to target the jewellery and limiting the staff exposure to this frightening event."

The state-of-the-art BANDIT is the fastest security fogging system of its kind in the world. When sensors detect an intruder (overnight protection) or a personal alarm is raised (daytime protection) the BANDIT’s patented high-pressure system INSTANTLY delivers a dense, visually impenetrable fog at the incredible rate of 28 cubic metres per second, projecting it 6 metres in the first 2 seconds alone. An average sized shop, office or showroom of 140 cubic metres takes just 5 seconds to fill.

The same BANDIT unit can be used for 24/7 risk applications. Daytime robbery deterrent is achieved by deploying a short controlled activation to create a fog curtain between the raider and the staff and/or goods. Overnight protection is achieved via a longer activation filling the entire area with impenetrable fog where valuable stock, equipment and other contents can be obscured from sight, thus protecting them from the possibility of theft or damage, until the authorities arrive.

The benefits of installing a Bandit: