Keeping homes and communities safe and secure is the essence of local policing and lies at the very heart of North Yorkshire Police. But did you know that the police could already be involved in keeping you and your home safe, before your house and surrounding neighbourhood has even been built?

North Yorkshire Police’s Designing Out Crime Officers work closely with architects, designers, developers and local authorities at the planning stage of new developments, to ensure crime prevention and safety has been taken into consideration when new housing schemes are being designed.

The Designing Out Crime Officers, or DOCOs as they are known, provide specialist crime prevention advice around the design of new housing developments or refurbishments and new commercial, office, industrial, retail, leisure sites and licenced premises.

Developers who are building more than ten homes can seek the input of the Designing Out Crime Officers, to make sure the neighbourhoods they are planning include simple yet effective crime prevention solutions, for both the home itself and the community as a whole.

Measures such as adequate lighting, the design of communal spaces, doorways not being concealed and hidden in shadow, clear lines of sight, perimeter security and the strategic use of planting and hedging can have a simple, yet dramatic impact on the level of crime experienced in new neighbourhoods. 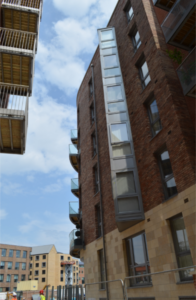 The DOCOs are also responsible for promoting and implementing national crime prevention initiatives, such as the Secured by Design scheme, a police initiative which further improves the security of buildings and their surroundings.

Property developers can apply to the officers for Secured by Design status, which shows that their buildings adhere to a higher level of safety and security standards. Developments which adhered to Secured by Design standards have shown impressive crime prevention results, with research reporting an 87% decrease in crime, compared to other similar builds.

A York-based development recently awarded Secured by Design status is the Hungate block F development in the city centre, a project which North Yorkshire Police DOCO Richard Ball has been involved in since its inception.

Speaking about his role and the Secured by Design scheme, Richard said: “The Hungate development has been a substantial project which has been ongoing for a number of yearsin the city centre.

“Right from the very start, the security and safety of the properties being built and the homeowners themselves, has been central to the design and build of the development. By adhering to the standards of the Secured by Design scheme, the developer – Hungate Regeneration Ltd, has ensured that the development will enjoy a high level of safety and security for many years to come.”

As a former neighbourhood police officer who, after retirement, retrained in town planning, Richard is able to bring a lot of practical policing experience to his role. He continued:

“I know first hand how ill-thought-out design and a lack of consideration about crime prevention in the layout of housing developments can lead to crime hotspots. By not ensuring there is natural surveillance, or if pathways are concealed or given sharp corners and a lack of lighting, it can create vulnerability that criminals can exploit.

“That’s why my job is so satisfying, knowing that even before foundations are dug or the first brick has been laid, the long-term security of people’s homes has been taken into consideration to ensure they literally are ‘as safe as houses’.

“I’d highly recommend developers look into the scheme and visit the website www.securedbydesign.com to see for themselves the simple measures they can take to ensure their development can carry the SBD status.”

Speaking about the benefits of Secured by Design, Steven Graham, Community Liaison Manager for Lendlease (pictured below), the developers of the Hungate site, said:

“Our aim is to deliver a new sustainable community and we see Secured by Design as an integral part of this. Providing safe and secure developments is not only beneficial for the residents, but also the wider community.

“The scheme helps provide a set of nationally recognised standards, that we can bench mark against and aim to build on top of, ensuring that key design decisions and product choices take safety and security into account from day one.

“Early involvement of the police and Secured by Design in our developments ensures that any identified site specific problems can be resolved passively and discretely within the development design. Over the last five years we have worked together closely on the Hungate project, and we have always found the police’s input to be both helpful and pragmatic throughout.

“We see Secured by Design as a win-win for all parties, making homes more secure, developments safer to walk through and also ultimately meaning less pressure on police resources.”