BikeRegister rides to one million registrations

BikeRegister, the National Cycle Database, is delighted to announce its millionth registration to the BikeRegister database, as bike owners across the UK race to join the movement to reduce cycle crime.

Owned by family-run company Selectamark Security Systems plc, the UK’s leading security marking provider, BikeRegister is used by all UK Police Forces to search for stolen and recovered bikes – a service it offers to the police at zero cost.

Registering on BikeRegister is free and takes just a few minutes to do. It means that a bike can still be recovered in the event of it being stolen. However, registration alone does not help make the bike a hard target to steal.

If you love your bike and want to protect it, BikeRegister offers three security marking kits, available to purchase online, that significantly reduce the chances of becoming a victim of cycle theft. Not all frame numbers are unique, so choosing one of the kits will provide a bike with its own unique reference number. 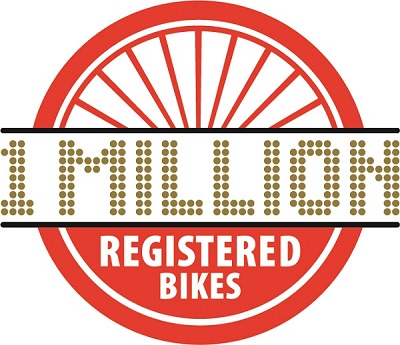 Not only does BikeRegister help reduce instances of cycle theft, but it also enables hundreds of cyclists to be reunited with their bikes after they have been stolen. Over 1,000 searches are made on BikeRegister each day by the police, retailers and members of the public, making it an essential tool in the fight against cycle crime.

BikeRegister was pioneered by security expert Jim Brown, Chairman, and is now run by his two sons James Brown, Managing Director, and Jason Brown, Commercial Director. Initially launched in the late 1990s, BikeRegister’s significant growth has only really happened in the last 8 years and it is now recognised as the UK's National Cycle Database.

In 2012, BikeRegister successfully bid to become London’s official cycle database, endorsed by the Metropolitan Police and Transport for London.

Recently, with the development of internet auction sites and online sale sites, BikeRegister has become a valuable resource in allowing purchasers to quickly check the details of bikes they are considering purchasing to see if there is a record of it having been stolen. This is done through its BikeChecker feature on the website.

BikeRegister has also become a go-to authority on bike theft trends and patterns. It recently produced some data analysing bike crime during lockdown. It showed a significant rise in bike theft reported to them – up a staggering 69.4% in October 2020 against the same month in 2019.

The company has helped inform government on legislation relating to cycle crime, and in 2017 produced its own National Cycle Crime Survey.

Superintendent Cleland said: “This week we reached an historic milestone with the one millionth bicycle registered on BikeRegister. Registration means that even if a bicycle is stolen there’s an opportunity for it to be recovered and returned to the owner.

“There’s also a good chance that bikes registered with BikeRegister are less likely to be stolen because thieves look for the easiest opportunity. If you’ve yet to register your bicycle, then why not do it right now. Don’t forget to get the best lock you can afford and use it whether at home or away.”

Mick Cogger, former Crime Prevention Officer for Sussex Police, was instrumental in helping set up the original format for the marking and registration of bicycles by police forces in the UK: "When I assisted in developing the initiative with BikeRegister, my aim was to reduce the number of cycles that were being stolen and at the same time make the ownership of a cycle much easier to establish.

"Being able to identify the rightful owner at the initial point of checking, meant that the police could establish if the cycle had been reported stolen or lost and as a result provide evidence for an immediate arrest, as well as enabling it to be quickly returned to its owner and therefore reducing the likelihood of an insurance claim for the loss.

"With the perseverance of Selectamark, BikeRegister has gone from strength to strength and I would like to praise them for their tenacity and hard work with this excellent crime prevention and crime reduction initiative."

BikeRegister MD James Brown concluded: “We are extremely proud of achieving this significant ‘one million’ registration milestone. This has been made possible thanks to the hard work of our fantastic BikeRegister team and police forces up and down the country. We are now calling for all cycle retailers to join the movement. By registering all bicycles, e-bikes and even e-scooters at point-of-sale, they can make it impossible for thieves to operate in this space.”

Secured by Design Development Officer Lyn Poole said: “I have had the pleasure of working with Selectamark since 2005 when I was a serving Metropolitan Police Officer. One of my aims was to reduce cycle thefts in the Bromley Borough. I have always found the team at Selectamark very helpful, knowledgeable and extremely passionate about reducing crime and cycle thefts with their BikeRegister.

“I am thrilled to hear about the millionth registration at BikeRegister, but not surprised as it has gone from strength to strength over the years. Having retailers take up the marking would be a great bonus as the police services across the UK, the British Transport Police, schools and cycling clubs have been working with Selectamark for a long time”.

BikeRegister also hold an annual Cycle Crime Conference, which is the only national security event focusing on cycle crime. At the conference, key members from the police, government, security and cycle industry address delegates on the latest ideas to tackle cycle theft. The next Cycle Crime Conference is planned for May 2021, and the event will follow the necessary Covid-19 guidelines and restrictions.

Other plans for 2021 include expanding into Europe after BikeRegister’s successful launch in Ireland in 2018. The French government have recently made marking and registration of new bikes compulsory in France, and BikeRegister are confident that the successes from the UK and Ireland schemes stand them in good stead when entering these new markets. 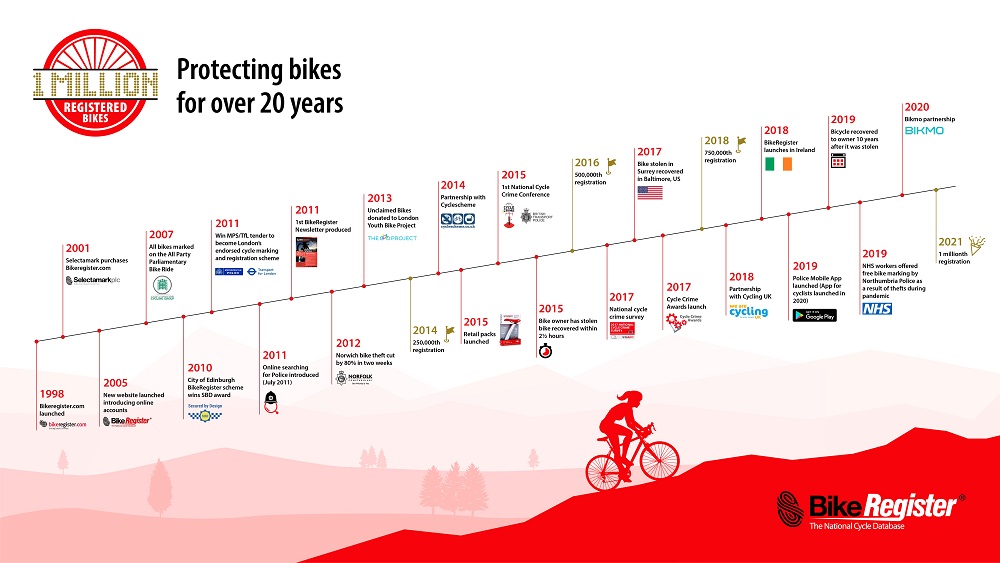 Under normal circumstances, UK Police forces run BikeRegister cycle marking events across the UK where they mark and register bikes belonging to members of the public. However, during the pandemic, Police forces have had to get creative and have found new ways to offer bike marking sessions that keep the public and their bikes safe.

Meanwhile, Cheshire Police offered ‘virtual’ bike marking where a kit was delivered to the bike owner’s home for them to apply.

NHS workers were offered free bike marking during lockdown after many of them were targeted by thieves. Police forces including Northumbria Police, Gloucestershire Constabulary and Police Scotland offered reassurance to NHS workers by using BikeRegister to mark their bikes and help safeguard their property.

The BikeRegister website is fully responsive, allowing customers to access their account, and Police to check stolen bikes, on smart phones and tablets whilst on the go. There is also a new Android app, available on Google Play, that enables retailers to register bikes at point-of-sale, quickly and efficiently.

BikeRegister is a Secured by Design member company, having achieved Police Preferred Specification.