CSAS and Venture Security: ‘Our work with street-attached individuals is a most valuable service to police forces and local communities’

One of the first security companies to pioneer the use of police powers in Hampshire and Wiltshire –Venture Security – has prepared its front-line officers for a greater demand on its services as businesses and town centres recover from the COVID-19 lockdowns and restrictions.

The Andover-based company has around 15 officers accredited with low-level police powers under the Community Safety Accreditation Scheme (CSAS) contained in Section 40 of the Police Reform Act 2002 and has put in a request already to Hampshire Police, its local Constabulary, to accredit a further five officers.

Now residents and visitors have returned to High Streets and shopping centres, Venture Security’s Director Sara Howe said their officers had to be well prepared, particularly in their work with ‘street-attached individuals’, such as those who are homeless or may have history of drug taking – and may cause anti-social behaviour.

This is where having wider stakeholder relationships are important because officers will be able to assist those most in need by directing them to the appropriate support agency, such as local housing and social services departments, she said. 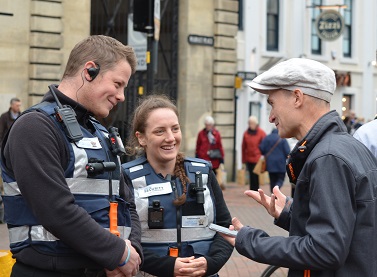 “It’s about continuing to work with those individuals who need our help the most, and to make sure, in the busier footfall areas, they are not forgotten. Our constant presence and regular contact means officers will see changes in behaviour of individuals and changes in trends and patterns of behaviour and where they take place.

“One of the things we never envisaged as part of this role, but has come out over time, is the relationships our officers develop with the street-attached individuals. Because our officers have a constant presence, they form relationships and raise concerns if someone is looking unwell or behaving differently. They have managed to resuscitate a number of individuals who have taken overdoses and get help to people who may otherwise have been overlooked, gone unnoticed or fallen through the cracks in the system.

“It’s about listening, caring and having conversations with them. It’s about acting without prejudice – you don’t base your view on first impressions and your assumptions. You find out what’s happening in their lives.

“Their role is so much more than just tackling day drinking or begging. They have become a kind of community ambassador. The street-attached individuals are more likely to trust our officers rather than someone from the police or social services they have never met before – and this is a most valuable service to police forces and local communities.”

Sara said it is also about reporting incidents, knowing when and how to escalate incidents and making sure the information we gather is reported to the right person in the most appropriate agency best placed to provide assistance. “What we aim to do is convert tangible information into practical solutions.” 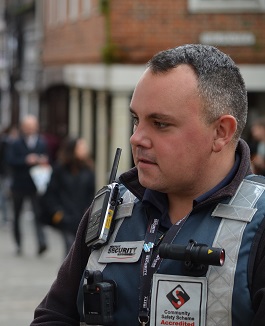 Virtually all Venture Security’s officer engagements with street-attached individuals result in assistance being provided before resorting to their low-level policing powers, which include being able to request a name and address for anti-social behaviour; require persons aged under 18 to surrender alcohol; seize tobacco from a person aged under 16; and deal with begging.

“CSAS powers provide another tool in the officer’s toolbox – and we give clients further peace of mind that our CSAS accredited officers have been through comprehensive training,” said Sara.

Using an external training agency, their CSAS training includes front-line skills such as first aid, mental health, drugs, knives and CCTV. The training makes these officers the most qualified members of the Venture Security team because of the nature of the work that they do. The company’s management team has received the same training to make them aware of the issues their officers face in their day-to-day work.

There are weekly meetings with council contacts and fortnightly meetings with police officers to share information and intelligence. This helps to flag up the need for early intervention to prevent more serious incidents.

Venture Security was the first private security company to run a CSAS scheme in the county of Wiltshire. Contracted to Salisbury City Council, they started using low-level police powers to tackle anti-social behaviour in the city centre in June 2019 – a move which followed its contract with the council to provide Security Industry Authority (SIA) approved City Centre Officers from July 2017.

Its officers provided valuable assistance when police officers were drained from the city centre to deal with the impact of the widely publicised Novichok attack on a former Russian spy and his daughter who were poisoned by the nerve agent there in March 2018. The incident led to a police shut down in affected areas for safety and evidential purposes. A woman later died after handling a contaminated perfume dispenser. The disruption to the city lasted for more than a year. 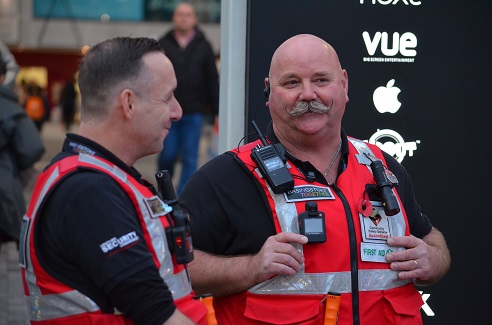 Venture Security is responsible in Salisbury for dealing with anti-social behaviour in the market square and green spaces managed by the council. Whilst officers are not expected to enter the premises of businesses in Salisbury, including retailers who are responsible for their own security, they will respond if they receive a call on their shop watch radio.

The officers in Salisbury were tasked initially with a six-week assignment to make discreet observations on a group of around six individuals who gathered in the market square to drink. That drinking led to fighting and their bad behaviour discouraged visitors and impacted the entire city centre. By day two of the assignment, Venture Security was being asked to intervene to address their behaviour directly, and by day four, the individuals’ behaviour had improved to the point where residents and workers started to return to shop and eat their lunches on the Market Square benches. Previously, the council had been calling the police to respond but other more urgent priorities meant they didn’t have the resources to do so. “Our presence was enough to quash this behaviour,” explained Sara.

The Salisbury project was then extended to six months, then a year. Salisbury City Council then put out a tender for the work, which Venture Security won. The number of street-attached individuals fell from 11 to just one in the course of a single 12-month period and the company was told by a Police Superintendent in the city that their work had reduced the number of calls to police by 35% over a two-year period.

Venture Security was one of the first companies to run a CSAS scheme for city centre security in the county of Hampshire. It is involved in two schemes currently, one in Winchester, the county town, and a smaller scheme in Andover where the company has its head office. Both are Business Improvement District (BID) funded schemes run as part of their Crime Reduction Partnerships with Winchester starting with CSAS powers first in November 2018 and Andover in September 2020. Being BID funded, they are known as Ranger Schemes. 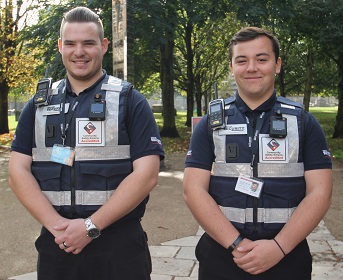 The role of assessing private sector companies seeking approval to run a CSAS scheme is carried out on behalf of the National Police Chiefs’ Council by Police Crime Prevention Initiatives (Police CPI), a police-owned organisation that works on behalf of the Police Service throughout the UK to deliver a wide range of crime prevention initiatives to deter and reduce crime.

Ken Meanwell, Compliance Manager, Police CPI, said: “Local initiatives like these run by Venture Security really highlight what a huge difference private security companies can make when they have the skills and motivation supported by police powers to be used as and when necessary for the benefit of local communities.”

About Police CPI
Police Crime Prevention Initiatives is a police-owned organisation that works on behalf of the Police Service throughout the UK to deliver a wide range of crime prevention initiatives to reduce crime and demand on police forces as well as acting as a catalyst to bring together public and private sector organisations to create safer communities.
Email:
http://www.policecpi.com
https://www.policecsas.com