CSP shows it's match fit with CSAS as football restarts

Other match grounds where The Combined Services Provider Limited (CSP) has sent staff to assist with match day operations since the restart include Tottenham Hotspur, Arsenal and Crystal Palace.

Matches are being played behind closed doors with clubs and staff adhering to Government COVID-19 safety requirements, such as social distancing, workplace cleaning, the use of personal protective equipment and workforce management.

The Premier League season got back underway on 17 June with two matches at Aston Villa and Manchester City followed by a full round of fixtures the following weekend after being suspended for three months because of the coronavirus pandemic. The matches marked the start of a total of 92 games still to be played this season.

At all events, the numbers of operatives will vary depending on the crowd attendances and road closures required, he explained.

However, since the return of football following the lockdown when matches have played to crowd-free stadiums, the numbers of operatives required have reduced considerably, with some clubs only requiring minimal road or traffic management support or none at all. 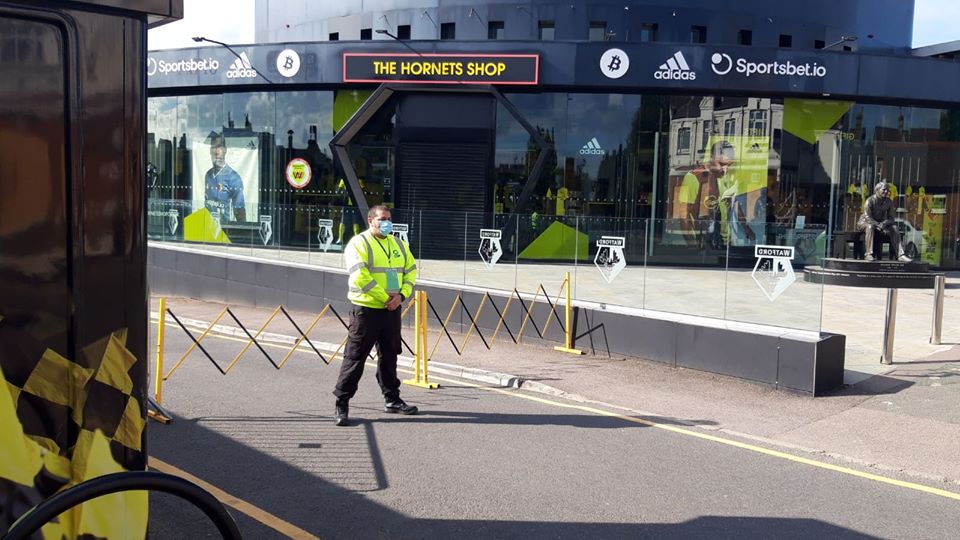 Last month (June) PCPI reported that CSP had just one week from initial enquiry to live operations to design and implement detailed plans for the reopening of six waste and recycling centres in North London. Each plan had to be approved by the respective local authorities and the Metropolitan Police, and traffic signage manufactured.

At the same time, CSP was asked by Surrey Police to assist by sending staff with police powers to waste sites at Earlswood, Guildford, Leatherhead and Woking. Today, CSP is supporting three additional Surrey sites with its staff at Caterham, Camberley and Shepperton.

Tony said: “Our services at waste and recycling centres are being extended almost on a weekly basis and our involvement is dependent on visitor numbers and remain ongoing for the time being.”

CSP has provided employees with police powers at the NHS Coronavirus Test Centre in North Greenwich since 12 May. Currently, CSP’s services here are being extended on a fortnightly basis.

CSP’s accredited employees’ responsibilities include managing safe vehicle movements in the queues and at key junctions and roundabouts near the sites whilst minimising impact on local residents and through traffic.

Their staff were accredited with certain police powers under the Community Safety Accreditation Scheme (CSAS), a voluntary scheme, contained in Section 40 of the Police Reform Act 2002.

The role of assessing private sector companies seeking approval to run a CSAS is carried out on behalf of the National Police Chiefs’ Council by Police Crime Prevention Initiatives (PCPI), a police-owned organisation that works on behalf of the Police Service throughout the UK to deliver a wide range of crime prevention initiatives.