Dover Partnership Against Crime is one of the first Business Crime Reduction Partnerships in the country to achieve the new national accreditation awarded by Police Crime Prevention Initiatives.

The accreditation recognises good practice and professionalism, ensuring that the Business Crime Reduction Partnership (BCRP) is functioning in an ethical manner and within the law, specifically ensuring compliance with the General Data Protection Regulation. The standards include good management practices and procedures such as membership agreements, data security and compliance with current legislation. It includes having robust information for members and partner organisations that is up to date as well as making it easily accessible 24/7.

Presenting the award at Dover Police Station Sophie Jordan of the assessing organisation National Association of Business Crime Partnerships, said: “I’d like to congratulate Dover on being the first in the country to achieve the national standards accreditation.

“This is a higher status accreditation due to the depth of work that has to go into meeting this new criteria and the new standard that’s been set by the National Association of Business Crime Partnerships.

“The profile of partnerships across the country who can achieve this accreditation will be raised, as it will give national retailers and partner agencies such as the police more confidence in our partnerships. Well done Dover.” 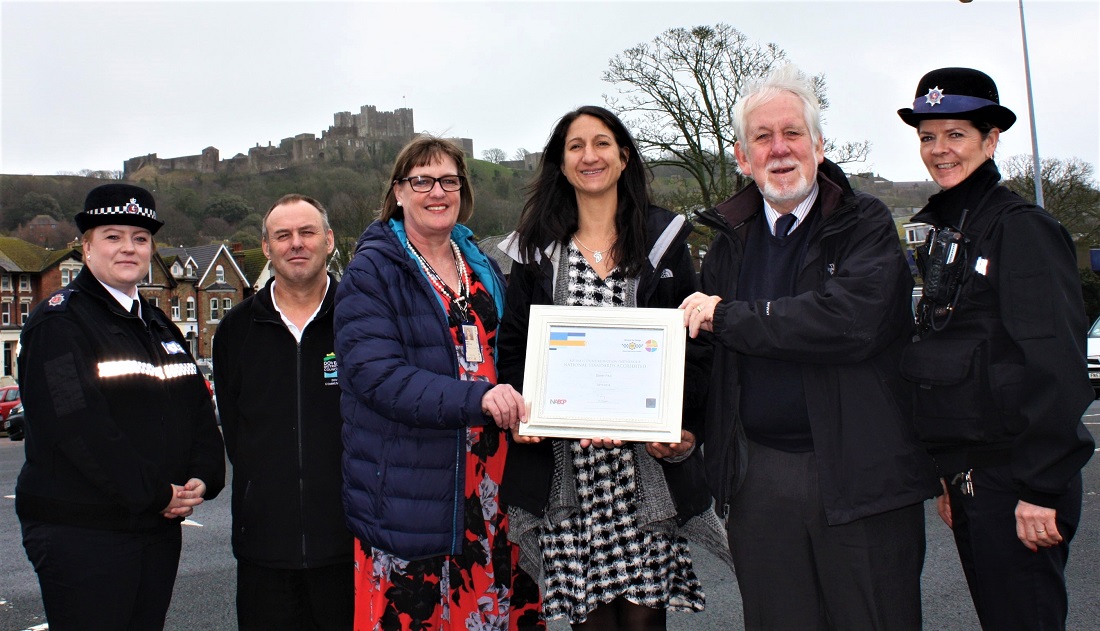 Set up in 1995 and currently with more than 120 members, Dover Partnership Against Crime (DPAC) is one of the most successful groups of its kind in the country involving traders, business people, police and the local authority in tackling crime in Dover, Deal and Sandwich. It is one of the most successful business crime partnerships in the country and has consistently been awarded a distinction at its two-yearly assessments.

DPAC's new digital radio system provides secure links to retailers, licensees, taxi companies, transport firms and local tourist attractions, with the CCTV control room and the police providing a platform for users to be able to help each other and pass information on.

In March 2002, DPAC became the first town in Kent to receive the Home Office Safer Shopping Award, having achieved the stringent criteria laid down for this award. This was renewed in 2005 with the Safer Business Award, and at the same time, they gained the Safer Socialising Award. Their co-ordinators work with licensees to encourage them to gain their own individual awards, a number of which have now been presented.

Graham Tutthill, Chairman of DPAC, said: “We are delighted to be the first in the country to be assessed and pass the assessment, and be presented with this certificate.

“DPAC has a very good history and has been very successful. We’ve been first in a number of initiatives that we’ve come up with and others have followed, which is good.

“We’ve been very active in combatting crime and anti-social behaviour not just in Dover, but also in Deal and Sandwich, working with the shopkeepers, businesses and the licensees of public houses and off-licences.

"This award is not only a testament to the hard work of our co-ordinator Karen Griffiths, but also to the efforts of all our members.

“We are delighted that we’ve passed the assessment and been accredited and we look forward to a new chapter in our lives going on from here”.

“We have a good relationship with members of the partnership, including local businesses and partner agencies. The focus is to proactively address crime and anti-social behaviour that affects our town’s residents and business owners throughout the day and during the night-time economy.”

Police Crime Prevention Initiatives (PCPI), which is often referred to by its most successful crime prevention initiative, Secured by Design, accredits BCRPs on a set of standards owned by the National Business Crime Centre (NBCC).

The standards have been created over the last 18 months by a group of industry professionals, led by Martin Blackwell, former Chief Executive Officer, of the Association of Town and City Management and including representatives from the NBCC, leading staff from the BCRP sector and business.

Accreditation is designed to enhance the level of partnership working nationally and encourage continued, significant, national business investment in BCRPs. In addition, the intention is that it will provide reassurance to Police Forces that data shared with BCRP partner organisations will be utilised in a responsible manner to reduce criminal activity.

Guy Collyer, Police Crime Prevention Initiatives, said: “The achievements of the Dover BCRP are commendable. This isn’t a new initiative, but 24 years of a partnership in Dover, dedicated to reducing crime and keeping people safe.”

BCRPs are subscription-based, business-led, non-profit making action groups, often associated with Business Improvement Districts (BIDs), working with Police Forces and Local Authorities to gather intelligence and share information to tackle crime and disorder affecting businesses from multi-chain retailers and small independent shops through to pubs and restaurants and nightclubs. There are approximately 400 BCRPs operating in the UK, seeking to make their local communities safer places to live, work and visit.

BCRPs are encouraged to contact one of the two Assessing Organisations working with the NBCC that have been authorised to carry out assessments leading to accreditation. They are the National Association of Business Crime Partnerships and Revive & Thrive.