A town centre crime reduction partnership, which responds to incidents like shoplifting and anti-social behaviour and helps the people who cause them, has received an award from Police Crime Prevention Initiatives (PCPI), which works alongside the Police Service to encourage and deliver safer communities.

The Yeovil Crime Reduction Team (YCRT) has radio links to its members, like shops and pubs, runs the exclusion scheme and works closely with the police CCTV control room to keep the town centre safe.

However, the YCRT is committed to getting to know and understanding the individuals who come to their attention so they can be signposted to a wide range of support agencies that offer practical support such as shelter, medical treatment, counselling and even food and clothes.

The aim is to break the cycle of repeat offending and social exclusion and to try to tackle the underlying issues. These could be mental health, drug abuse, homelessness, difficulties with welfare benefits, domestic violence or a number of these, or other issues. 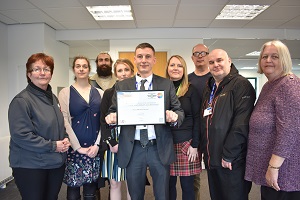 The team’s pioneering work has been so effective that it led to an 11% reduction in crime in Yeovil town centre in the 12 months to April 2017.

The YCRT’s new approach offering early intervention and triage services started in earnest after it became involved with the Yeovil One Team, which was set up as a Police & Crime Commissioner initiative to be a multi-agency hub, bringing together key organisations to share information about individuals with safeguarding needs. 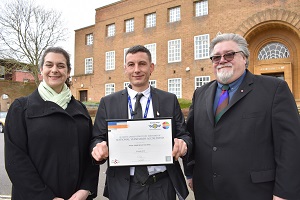 In March 2019, YCRT’s hard work was rewarded with a ‘Business Crime Reduction Partnership’ Award from Police Crime Prevention Initiatives, the BCRP accreditation body, which runs a number of crime prevention initiatives to deter and reduce crime.

BCRPs are required to demonstrate good practice and professionalism by ensuring they are functioning in an ethical manner and within the law. The criteria cover membership agreements, data security and compliance with current legislation. Yeovil’s assessment was carried out by Revive & Thrive, one of two organisations authorised to carry out this work nationally. 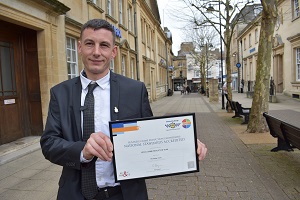 Receiving the award, Gareth said: “I am passionate about wanting to make Yeovil a better and safer place for people to come during the day and evening. All the organisations that we work with are working towards this goal. It’s very much an award for the team.”

Presenting the award, Guy Collyer, who has oversight of the BCRP accreditation for PCPI, said: “It’s not only commendable what you have achieved, but also it’s incredible. What you see from the media is that the Police Service cannot do it alone. It needs the help of BCRPs.”

Matt Powell, Director, of Revive & Thrive, said: "We are incredibly pleased that the new standards for accreditation have been launched. Yeovil is setting a standard that other BCRPs should be aspiring to.”

Yeovil Crime Reduction Team (YCRT) is a not-for-profit mutual society entirely self-funded by its 170 members drawn from the day and night-time economies. It is the hub for Yeovil, Chard and Crewkerne (Avon & Somerset police) and Sherborne (Dorset police).

PCPI is best known by its most successful initiative, Secured by Design (SBD), which seeks to incorporate crime prevention measures and techniques into the physical security of new developments. More than one million homes have been built to SBD’s policing standards with reductions in crime of up to 87% every year.