Dual certification, meeting all the relevant requirements for security and fire

The tragic fire at the Grenfell Tower in June 2017 has led to much examination of the escape protocols for high rise buildings and the materials and products utilised with the build process.

Post Grenfell, the government quite rightly called for further investigations and Secured by Design (SBD) took an active part as a member of the Grenfell Technical Group, which was set up in March 2018 to provide technical advice specifically on entrance doorsets to individual flats - which includes the door, associated frame and all component parts, such as the glazing and door hardware.

The Group, which included other not-for-profit organisations including the Fire Industry Association (FIA) and the Door and Hardware Federation (DHF), met frequently throughout the rest of that year. Our comprehensive technical findings were duly reported to government via the Grenfell Independent Expert Panel.

Building on the collective expertise and experience within SBD, FIA and DHF the three organisations took the unprecedented step of collaborating on a document entitled ‘Guide For Selecting Flat Entrance Doorsets’ which we published in March 2019.

Aimed at housing associations, landlords, building owners, developers and local authorities in England (but much of the advice is equally applicable to other countries of the UK, even though Building Regulations may differ slightly), it provides guidance about what to look for in flat entrance doorsets, how this relates to the latest advice supplied by government and why third-party certification of fire doorset manufacture, installation and maintenance is a critical part of fire protection.

We believe this document is an important step forward in the wake of Grenfell. 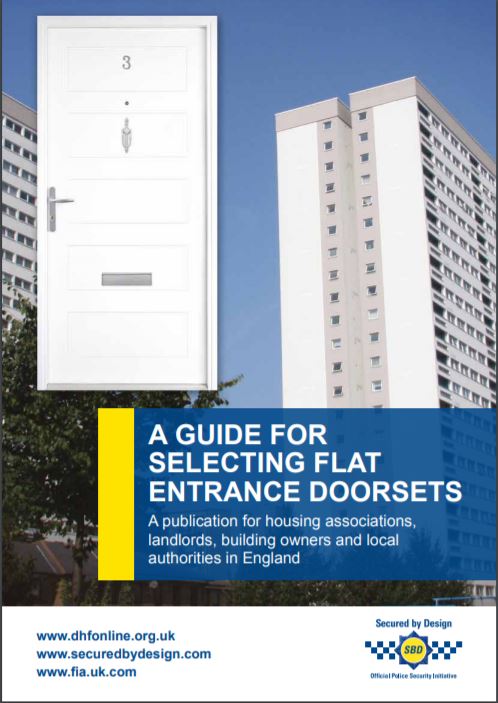