The first ever Secured by Design (SBD) Conference and Exhibition to be organised at a regional level, which was attended by more than 200 representatives from the design, planning and construction sectors as well as 20 member company exhibitors displaying their latest security-related products, has been heralded a huge success.

This was followed by presentations on collaborative working from Jon Wilson, an expert on local government and Chief Insp Leigh Norris, who are both working in the Essex Emergency Services arena; Kevin Steptoe, of East Herts Planning Department; and Peter Dawson and Chris King, both from Essex Council on the Essex Design Guide. Ian Le Gros, Head of RHS Garden Hyde Hall spoke about safe and secure gardens. 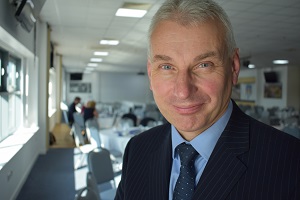 SBD Chief Executive Guy Ferguson (pictured above) spoke about how SBD had grown into Police Crime Prevention Initiatives (PCPI), a police-related organisation, which runs a number of initiatives, including SBD, to reduce crime and demand on Police Services.

In his summing up of the event, Guy Ferguson, considered the event an excellent model for other regions in terms of networking between relevant organisations, hearing informative and interesting partnership presentations and seeing the latest products from member companies.

He told the audience: “This has been an opportunity to take the lead in the planning process and promote engagement with SBD and push the boundaries of what we can do in regard to crime prevention. It’s been a privilege to be here and it’s an excellent beacon for crime prevention throughout the UK."

The event was organised by Heather Gurden, Strategic Designing Out Crime Officer, Eastern Region and members of her Eastern Region team. She said they wanted to showcase designing out crime across the region through better collaborative partnership working as well as by promoting SBD as the preferred enabler for security and crime prevention advice.

After the event, Heather said she was delighted by the feedback, which had been very positive with a ‘loud and clear’ desire and willingness for districts and counties to come together and be involved at the pre-application stage to reduce crimes like burglary that cause misery to victims.

For example, Chelmsford planners, who attended the event, said they now had a better understanding of the role of Designing Out Crime Officers and they will be looking for input from them on the strategic plan for West Chelmsford in the coming weeks.

“As we heard from the speakers, building in crime prevention is going to be especially important because of the enormous housing and building programmes being planned, not only in Essex but also around the country, over the next 20 years that will require significant changes to infrastructure.

“The emergency services, including the police, need to be involved in these planning discussions so they can best determine how they can together serve these new communities.”

Heather praised her team. “We had a lot of jobs to do to put this event together and they just got involved and got on with it. It was a great team effort." 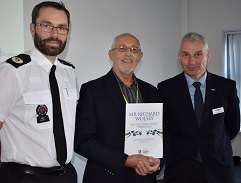 A certificate to mark six years of service as Designing Out Crime Officer, has been presented to Richard Wolsey (pictured above centre), of Norfolk, who retired recently.He was presented with his certificate during the conference.

In his citation Heather said Richard had for many years, unswervingly supported the crime prevention officers, architectural liaison officers and designing out crime officers in the delivery of their work. He had provided advice and guidance in their roles as well as welfare support, despite a heavy workload of his own.

Heather concluded: “Your support for them has undoubtedly made a positive impact on their ability to fulfil their roles, which in turn, has made a positive contribution to crime prevention and reduction.”