Rob is currently Ducati TriOptions’ top rider and his bike for the forthcoming season was unveiled at the MCN Motor Cycle Show at London’s ExCel Centre on Friday, 15 February. 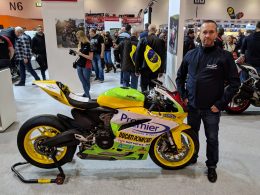 The bike sports the livery of Premier, which is producing the latest generation of steel doorsets, gates and screens, and Secured by Design, the national police crime prevention initiative.

Premier Managing Director, Neil Johns, said: “Premier has been a member of Secured by Design for many years. Part of our business plan is to help raise the profile of the organisation. The Ducati TriOptions motorbike series is covered on TV by both EuroSport and Channel 4 and with Rob being the star rider this season, we are hoping the SBD logo gets seen around the UK and beyond.”

The race season gets underway in the spring with the opening race at Silverstone over the Easter Bank Holiday weekend April 19-21.

Premier. which has been a Secured by Design (SBD) member company for more than eight years, has been through a major period of expansion at its factory at Hainault Business Park, Essex, with significant growth in the size and scale of its operations to meet customer demand.

During May last year, Premier became an official supplier of Swedish-based Hammerglass, another SBD member company. Premier now has 84 products in its SBD accredited range.