A film showing how Secured by Design (SBD), the national crime prevention initiative, is working with local authorities to reduce crime, is being shown as part of the Association of Public Service Excellence (APSE) conference in Oxford this week (6-7 September 2017).

The four-minute film (https://itnproductions.wistia.com/medias/nkbga1hhzv) was included in a specially-made series of programmes produced for the conference which has the theme of ‘Beyond austerity?’ 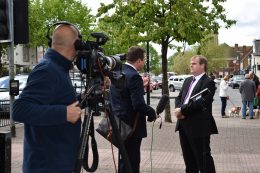 Alan Hall, Director of Communities at Epping Forest District Council, being interviewed by ITN Productions for the Secured by Design film

Speakers are highlighting key services and latest policy developments as they encourage delegates, who include Chief Executives and Directors of front-line services from around the country, to look beyond the austerity that councils have had to cope with to focus on ensuring a sustainable and supportive future for neighbourhood services.

The conference is one of the biggest events in the local government calendar.

The SBD film was made in partnership with ITN Productions, ITN’s bespoke production hub, and is introduced by national newsreader Natasha Kaplinsky.

The programme features key industry interviews and news-style reports along with sponsored editorial profiles and highlights how SBD’s network of around 200 police officers and staff are working with local authorities around the country.

It shows how Epping Forest District Council in Essex has gone one step further and included specially trained police officers in the Council’s Community Safety Team, which seeks to create safe communities and look after residents most at risk.

This team gets together with planning and housing officials prior to planning application stage to consider how all new developments submitted by independent and commercial builders can achieve SBD standards of security for both the built environment and physical security.

On camera, Paul Gardener, Community Safety Officer, Epping Forest District Council, said: “The collaboration with SBD is a no brainer. It has been shown to produce significant reductions in crime and will also help reduce the cost to the public purse on investigating crime, disorder and anti-social behaviour.”

Alan Hall, Director of Communities, Epping Forest District Council, is also filmed for the programme. He said: “We are encouraging as many developers as possible to adopt SBD. Why wouldn’t you harness the expertise of specialist police staff, community safety officers, developers and architects to achieve longer term community benefits?”

Heather Gurden, Strategic Designing Out Crime Officer, Essex Police, who is embedded with the council’s Community Safety Team, explained: “This is best practice because it brings together allied professionals who share the same concerns to make sure we deliver a better quality place to live and work.”

The film also features interviews with global developer Lendlease at their Elephant Park regeneration at Elephant & Castle in central London and the Chief Constable of South Yorkshire, Stephen Watson, who is the National Police Chiefs’ Council lead on crime prevention.

The programme includes graphics of independent academic research which has found that SBD new-build properties are up to 75% less likely to experience a burglary than comparable non-SBD properties. This was based on research supplied by Professor Rachel Armitage, of the Secure Societies Institute, University of Huddersfield, who explained that convicted prolific burglars themselves had endorsed the techniques of SBD after they were shown a series of photographs of properties they would target and those they would avoid.

SBD Chief Executive Officer, Guy Ferguson, said: “Local authorities are an important audience for us and we have been delighted by this opportunity to show them our film about how we can work together to reduce crime and provide safer, more cohesive and desirable communities, where people choose to put down roots.”

About Secured by Design:
SBD is the national police crime prevention initiative which works closely with UK Police Forces and a wide range of other organisations, including National and Local Government, British and European Standards authorities, the construction industry, trade associations and manufacturers, to achieve sustainable reductions in crime through design and other approaches, to enable people to live in a safer society. SBD works across the full range of the built environment on new-build developments and major refurbishments in sectors including housing, commercial, retail, mixed use, transport, health, education, leisure and others. SBD has built up a wealth of expertise through active involvement in local communities – adapting its guidance to keep pace with changing patterns of criminal behaviour. For police and local authorities, falling crime reduces demands on services and enables them to focus on other priorities. With more robust products, SBD also frees up budgets by reducing repair and maintenance costs.
Tel: 0203 8623 999
Email:
To view the film visit: https://itnproductions.wistia.com/medias/nkbga1hhzv