Filming for the next star-studded Batman movie on the streets of Liverpool gave private company Paramount Stewarding and Security the highest profile opportunity to use their police powers granted by Merseyside’s Chief Constable under the Community Safety Accreditation Scheme (CSAS).

The arrival of production crews led to barriers being put up around St John’s Gardens and the Lime Street entrance to St George’s Hall, and the closure of a number of roads including William Brown Street in preparation for filming the remaining 75% of the globally-awaited, Hollywood blockbuster simply called ‘The Batman’. 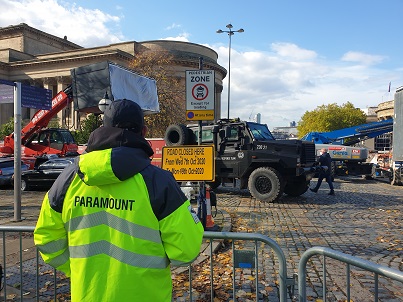 To ensure minimal disruption and to keep public transport and traffic moving, Paramount worked closely with Merseyside Police and Merseytravel, which is the strategic transport advisor to the Liverpool City Region Combined Authority and is also responsible for transport delivery.

In particular, Paramount worked to:

- re-route pedestrians around the large amount of plant machinery that was sited on pavements
- redirect double-decker buses from their usual routes so they wouldn’t feature in the background during filming
- provide COVID marshalls to prevent large crowds gathering to watch the action. 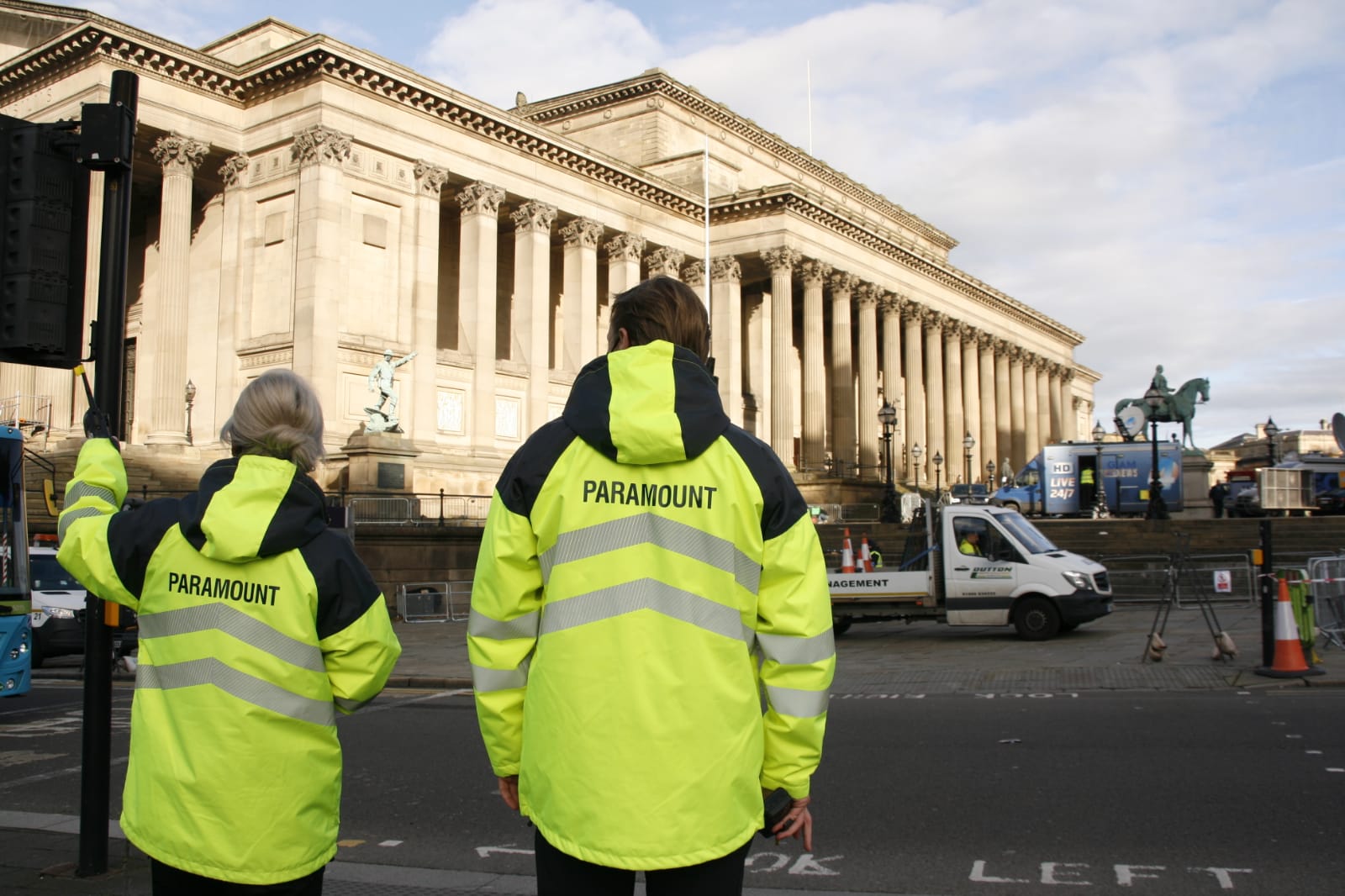 Their activities extended into the night when they diverted the main bus route intermittently away from Lime Street and William Brown Street due to critical filming.

As well as the City centre and its busiest city centre roads, such as outside Lime Street Station, the main station into Liverpool, Paramount CSAS staff were also deployed to other key filming areas within Merseyside.

Christine Fletcher, Director, Paramount Stewarding and Security, said: “There were extremely strict COVID measures in place throughout, implemented and monitored by Warner Bros, including a remote log in and daily health screening.” 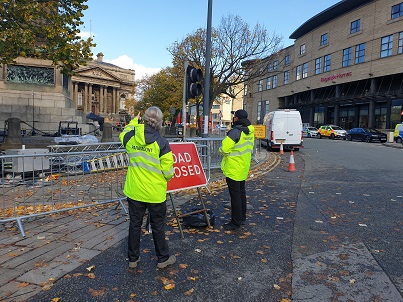 The Paramount staff have been accredited with certain police powers under CSAS, a voluntary scheme, contained in Section 40 of the Police Reform Act 2002.

The role of assessing private sector companies seeking approval to run a CSAS scheme is carried out on behalf of the National Police Chiefs’ Council by Police Crime Prevention Initiatives (PCPI), a police-owned organisation that works on behalf of the Police Service throughout the UK to deliver a wide range of crime prevention initiatives. 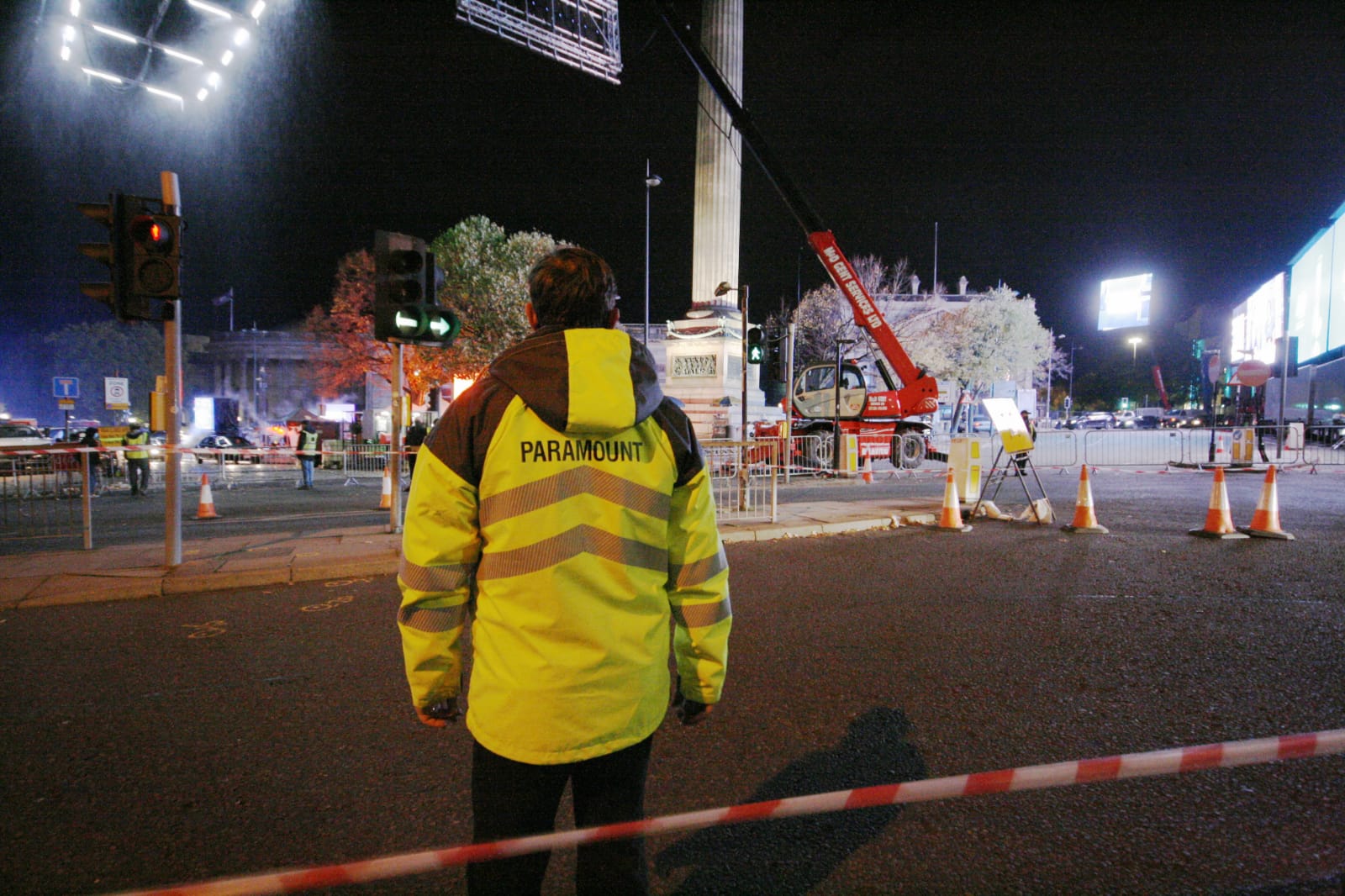 PCPI Compliance Manager, Ken Meanwell, who leads on CSAS, said: “This is an excellent example of how CSAS powers can assist private security companies reduce disruption to the general public and assist with the efficient running of events.”

The Batman filming was due to take place in Liverpool in March 2020 but ground to a halt because of the COVID-19 pandemic. When filming resumed in the city it took place against a background of some of City Centre’s most iconic and historic buildings, such as the:

County Sessions House. Built during the 1880s to house the Quarter Sessions, which were courts in which cases involving non-capital offences were tried by magistrates. Its basement is entirely taken up with cells. Quarter Sessions were abolished in 1971. Today, the Courthouse comes under the management of National Museums Liverpool and is used for staff offices, a lecture theatre and storage.

St George’s Hall. Regarded as the emotional heart of the City and is a Grade 1 listed building. Dating back to the 1840s, it was designed to reflect the style of the Roman and Greek Empires and meet this City’s fast-growing demand for large music festivals as well as the need for Crown and Civic courts. With the Courts relocated elsewhere, today the building is a focal point for cultural, community, civic, corporate and performing arts activities.

The Walker Art Gallery. Open in 1877 and described as the national gallery of the North, it is home to Liverpool’s outstanding art works, some of which have been on display for nearly 200 years.

The film stars Robert Pattinson as Batman, Zoe Kravitz as Catwoman, Paul Dano as The Riddler and Colin Farrell as The Penguin. The current scheduled release date is March 2022.

About Paramount Stewarding and Security Ltd

Launched in 2002 by the chief stewards at Everton and Liverpool Football Clubs, Paramount Stewarding and Security today provides the security, stewarding, crowd and road management at some of the largest sports, cultural and festival events around its home town of Liverpool and throughout the UK. Its sports events include football, tennis, road running, horse racing and motor racing. In addition, it offers COVID marshalling services as well as traffic marshalls and site banksman services. It is also experienced in the education sector providing security services to schools and colleges.
Tel: 0151 922 5115
https://paramountstewardingandsecurity.co.uk/