Ex-Service personnel, including some that have been severely wounded in the line of duty, can look forward to moving into new, purpose-built homes, which have achieved the highest standards of security awarded by Secured by Design (SBD), the national police crime prevention initiative.

The 68 flats and houses, mostly set around a three-sided square overlooking a manicured lawn, will become available from the end of September at Haig Housing’s latest development for Veterans and their families on their headquarters’ estate, off Green Lane, Morden in south-west London.

The estate has been described by the local policing team as an ‘island of tranquillity’ situated next to the sprawling 1930s St Helier Estate.

All the new homes on the Haig Housing development have robust doors, windows and locks that meet SBD’s security requirements and benefit from layout and landscaping techniques to maximise natural surveillance, create defensible space and limit excessive through movement. Developments that incorporate these features have been proven to reduce crime by up to 87% every year.

Although set on a private estate, the roads have street lights. There are illuminated bollards in communal gardens and controlled access to flats by entry phone with residents using a key fob.

Haig Housing can trace its roots back to the 1920s and derives its name from Field Marshal Earl Douglas Haig, who was the British Commander on the Western Front for most of World War I.

A range of flats, family-sized houses, maisonettes and bungalows were built mostly during the 1930s, ‘50s and ‘90s and let at affordable rents to qualifying Veterans and their dependants.

Today Haig Housing provides more than 1,500 homes in locations as far afield as Scotland, Penzance and the Island of Jersey. Their largest development is in Morden where the 68 new homes, which were granted planning consent in December 2016, create an estate of nearly 350 homes in total.

The Morden development of 1-4 bed flats and 2-3 storey houses have internet connections, are well insulated and have solar panels. It includes seven properties especially designed for people with disabilities with bathrooms and kitchens adapted for wheelchair use, including height adjustable working surfaces. Outside in the street are a number of electric vehicle charging points.

The homes have been funded with help of a grant from the Ministry of Defence Veterans’ Accommodation Fund, provided by the fines levied on banks following the London Interbank Offered Rate (LIBOR) rate-rigging scandal. This grant achieved 40% of the overall cost and enabled Haig Housing to make a cost-effective plan for development. 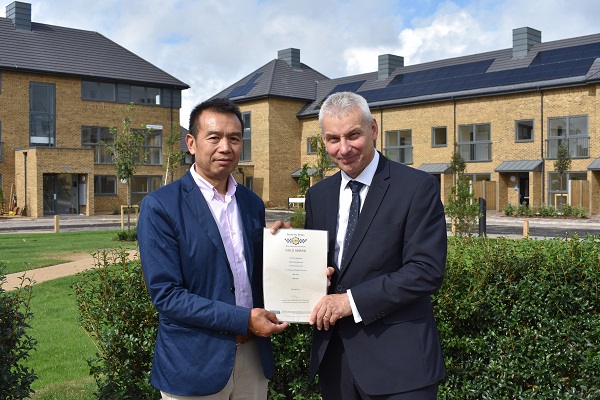 Guy said: “I am extremely pleased that we have been involved in providing new secure homes for the ex-Service community. These new homes are set in a wonderful and safe environment which is totally appropriate and befitting for those who have given so much in the service of their country.”

John said: “The vast majority of people want to feel secure in their home, not just ex-Service people, and that is something we worked on with the architects in designing this build.

“The applicants that we have taken around to see the show flats have been overwhelmed because it’s a well-designed scheme. It’s important for people who may have post-traumatic stress disorder and serious injuries to have that external environment around them to create a sense of peace and quiet.”

John explained that their developments tend to become close-knit communities as residents would have come from backgrounds of living in married quarters, barracks or similar and become accustomed to having a shared experience of some kind or another with neighbours. 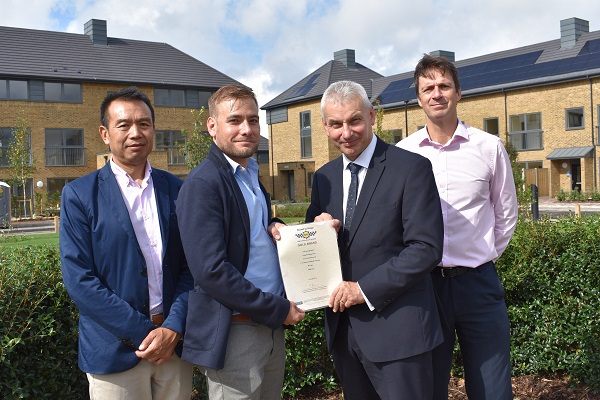 Paul Stannard, Project Manager of contractor, United Living, said: “It has been a privilege to build this development for Haig Housing knowing that the end users have been connected to ex-Services personnel. The scheme has been designed well to create a community feel and the standard of finishing internally and externally is to a high level providing good quality and much needed housing in the local area.

“There have been a number of opening ceremonies of the development which have included the Gurkha regiment and local councillors both of which have been very complimentary of the work undertaken here,” added Paul.

Pat Simcox, Designing Out Crime Officer, Metropolitan Police, who has worked with the developer, contractor and architect from the outset, said: “All the relevant parties involved in this development have been totally committed to taking on board police advice to make these homes as secure as possible.

“It was a pleasure working with United Living’s Design Manager Charles Collins (retired end July 2019) who ensured all of the specifications were resolved early in the build so that the sign off visit was effortless,” explained Pat.

The seven parts of the development are to be named after men and women who have inspired the Trust through service, deed and courage and include the Trust’s Patron, Her Majesty The Queen, five military and Special Operations Executive (SOE) Victoria and George Cross recipients and a much-loved local councillor and Armed Forces Champion. They are as follows:

Queen Elizabeth Terrace: Her Majesty The Queen has been the Patron of Haig Housing Trust since 1952.

Cyril Barton House: Flying Officer Cyril Barton VC was the only RAF Halifax bomber pilot to receive the Victoria Cross in World War II after serving 19 missions – the last being a raid on Nuremberg in March 1944 when he dropped his bombload over the target and managed to fly his badly damaged aircraft back to England where it crash landed. He died of his injures but three crewmen survived (three others had baled out earlier).

Jack Cornwell House: Boy 1st Class Jack Cornwell VC joined the Royal Navy when he was only 15 and was killed a year later in 1916 during the Battle of Jutland. Despite being mortally wounded and surrounded by dead and dying crew members, he never deserted his post. He was awarded the Victoria Cross.

Albert Dugdale House: Bombardier Albert Dugdale EM worked tirelessly to avert further disaster following a massive TNT explosion at a munitions factory in Kent in 1916. He was subsequently awarded the Edward Medal (later replaced by the George Cross) though he had died by this time.

Maxi Martin Court: Councillor Maxi Martin was the local borough’s Armed Forces Champion, past Mayor of the London Borough of Merton and local ward councillor for many years. A much-loved individual, she worked hard for local Veterans and young people.

Odette Sansom House: Odette Sansom GC was a French-born woman who moved to Britain in 1931 and worked undercover as an SOE in France during World War II. Captured, interrogated and tortured, she refused to betray fellow agents. She survived the war and was awarded the George Cross for her courage. She died in 1995 aged 82.

Kulbir Thapa House: Havildar Kulbir Thapa Magar VC, of the 3rd Queen Alexandra’s Own Gurkha Rifles, rescued three men from behind enemy lines in France in September 1915 despite being wounded himself. He was the first Nepalese Gurkha recipient of the Victoria Cross.

The new development also includes the Peter Walley Memorial Garden, in memory of Sergeant Peter Walley RAF, a young pilot who sacrificed himself when he steered his stricken Hurricane fighter away from crashing on the Haig estate in Morden during August 1940.
All of these new properties have been made available to eligible Veterans and their families and they join the UK’s biggest single community of ex-Service personnel (in Morden) totalling 346 homes.

Haig Housing was one of the Service charities to benefit from the hugely successful Poppies at The Tower installation which raised millions for Veterans’ charities five years ago. Haig Housing is the country’s leading charity for military housing.

More details about these new homes, together with information on all of the Trust’s estates, plus how to apply for housing, can be found at the Trust’s website: www.haighousing.org.uk and, in particular, under ‘Applying For Housing – New Development’.

Their Housing Options Team can assist with enquiries. They can be contacted by email: or by telephone on 020 8685 5777.