A new security standard has been launched in the UK for door entry units that control access to blocks of flats.

The standard that is referenced UL293 – ‘Outline of Investigation for Access Control Units intended for use in the UK’ – is the result of a three-year development period between UL, a global standards and certification body, and the police initiative Secured By Design (SBD), which is managed on behalf of the police service by Police Crime Prevention Initiatives (PCPI).

It has been a long established building industry practice in the UK for developers and builders to source access control units separately to the doorsets they will operate, and in some instances, good quality and certified security doors have been breached due to poor access control devices. This has meant that residents’ security has been compromised with intruders getting through the doors at the entrance to blocks of flats and then having free access within the building.

The introduction of UL293 now allows the access control unit to be tested to the same level of attack as the door, but supplied separately to the door, allowing greater choice to the design team without compromising security.

SBD, which works with developers, local planning authorities, industry regulatory bodies and police forces to achieve sustainable reductions in crime through design and other approaches, has included the new standard in its guidance documents for homes and commercial premises and it will be added to others as they are reviewed.

It means that not only is there a requirement for doorsets to attain minimum standards of security as before but also, for the first time, the access control unit that goes with it will have been certified to the new UL293 standard.

UL293 complies with recent European electrical standards and, whilst written for the UK market, it could be of interest around the world.

Mick Reynolds, Senior Development Officer, PCPI, said: “It’s a wonderful case of SBD working with a standards authority to produce a standard that has not been done anywhere else before.”

UL’s Chris Miles, Business Manager, Europe & Latin America, and Head of EU Notified Body for Construction Products, said: “I’m delighted that we have been able to work with this UK Police initiative to provide an independent means of showing the performance of access control systems to aid all users of these products. Providing safer living and working environments is a key part of UL’s mission. For SBD to choose UL to develop this standard is an important step in UL providing local guidance and expertise wherever our customers are located.” 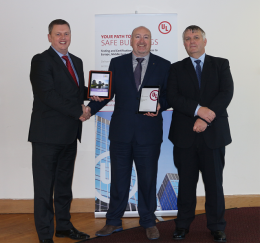