In partnership with Search Dogs UK and due to increased demand to assist with police operations, forensic marking company Selectamark can now offer a second SelectaDNA search dog.

Joining Jazz, the world's first detection dog to be trained to sniff out SelectaDNA forensic markers, is a 3-year old black Labrador called Ronnie. Like Jazz, Ronnie has been trained by specialist dog trainer Mick Swindells of Search Dogs UK, who has had Ronnie since he was 6 months old. 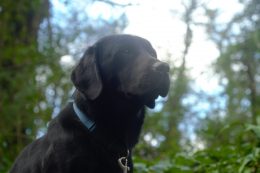 Mick said: "I saw the potential in Ronnie to become a search dog from a young age and so I kept him for further training. In 2014, Ronnie took part in a successful research project to determine whether or not melanomas (skin cancer) have a unique scent. Ronnie was then trained as a human remains detection dog, which is something he still does."

Earlier this year Ronnie took part in a BBC documentary called The Boy Who Disappeared, about a 16 year old boy who went missing more than 20 years ago.

In August, he travelled to Russia with Mick in an attempt to locate the body of Tsar Nicholas II's younger brother Mikhail who was murdered by the Bolshoviks in 1918. Mikhail is still revered by the Russians as being the last Tsar of Russia.

In September, Mick decided to dual train Ronnie as a SelectaDNA forensic marker detection dog to compliment Selectamark's first dog, Jazz. Selectamark produces the SelectaDNA system, which can be applied to items of value and criminals, and is unique to each address or customer, which helps police identify stolen items and offenders if they are found.

Mick said: "Jazz is now 6 years old and we wanted to be able to work the two dogs in tandem whist we could. Ronnie's nasal capability is every bit as good as Jazz's and we are sure he will prove an invaluable addition to the team."

Mick explained how the dogs operate differently from humans. "We can only search in 2D, i.e. in the line of sight, but dogs can search in 3D by using their noses. Jazz and Ronnie are able to touch marked items with their noses identifying the target scent of SelectaDNA, allowing officers to move in at this point and make further investigations."

Jazz has already worked with Merseyside Police on a special operation to catch criminals at the ports, and with Lancashire Police on Operation Tornado to catch metal thieves. She worked alongside officers from Cheshire Police as part of Operation Shield, searching pawn shops for stolen items marked with DNA, such as electrical goods and jewellery.

She was also used as part of the Met Police's Operation Ferrous, where she helped police search vehicles that had been stopped under suspicion of carrying metal or other stolen goods. Arrests were made during the operation and vehicles were seized.

Mick continued: "When we first chose Jazz as a search dog we never envisaged the type of work she would be asked to perform. Whilst she has a tremendous nose, and can find minute traces of scent in large areas, she can be timid when around people. Ronnie, on the other hand, is a bolder dog and is already showing great promise in searching people. He is already locating all types of SelectaDNA products in operational training scenarios."

James Brown, MD of Selectamark, added: "Using a trained dog like Jazz or Ronnie to sniff out property or criminals marked with SelectaDNA is surely the ultimate search tool for police and any other investigators determined to catch thieves and other criminals."

Jazz and Ronnie are available to assist police in a variety of operations, either individually or as a pair. Should you wish to utilise them please contact