Julian Hurst has joined the official Police Crime Prevention Initiative Secured by Design in support of their press and public relations activities.

After a childhood spend in Devon, Julian came to London in 1987 and enjoyed the next 30 years working for the Metropolitan Police Service, spending the last twelve years in media and communications supporting the Met’s media and social media engagement across the Capital.

Julian has two sons, with a dog from the local animal rescue centre completing the family. His interests include sports and fitness, France and the French lifestyle, American politics and reading – mainly biographies.

Looking forward to his time with Secured by Design, Julian says “After 30 fantastic and rewarding years in policing, I am inspired by the prospect of continuing to support the police in their pursuit of a safer society.

“With the immense challenges currently facing policing across the country, the preventative side of policing has never been more important. Secured by Design’s overarching ethos is directed at preventing crime and in doing so reducing the demands on our police forces.

“Secured by Design is owned by our police forces for the benefit of the community, is non-profit making and everything is reinvested back into policing. To my knowledge no other country in the world has such a set up and I am incredibly excited by the opportunity afforded to me with the company.”

Julian can be contacted on:
Email: 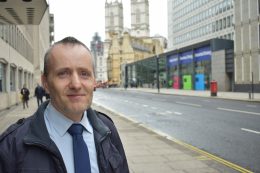