New advice published by the Centre for the Protection of National Infrastructure (CPNI) seeks to educate businesses on incidents termed ‘marauding terrorist attacks’, following a number of attacks in public places. 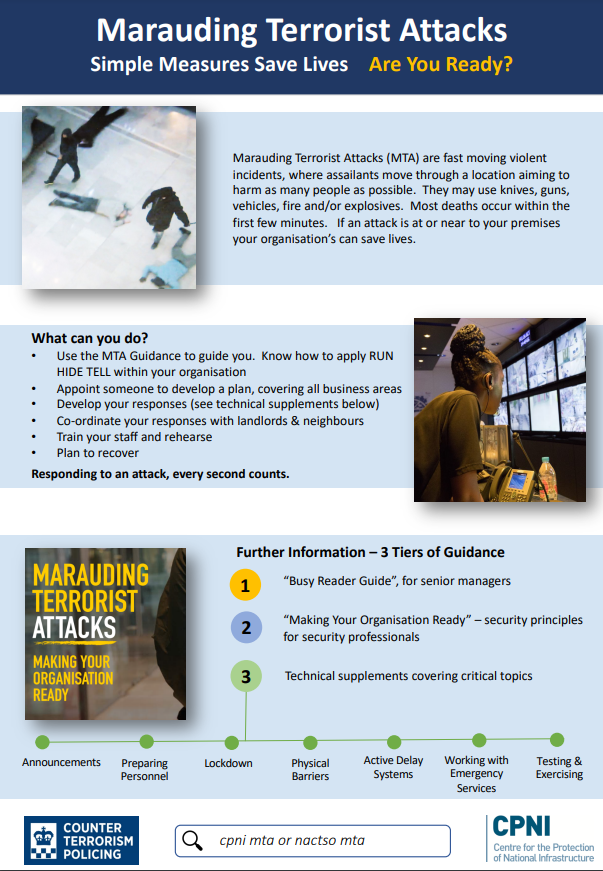 CPNI defines marauding terrorist attacks (MTA) as fast-moving, violent incidents where assailants move through a location aiming to find and kill or injure as many people as possible. Most deaths occur within the first few minutes of the attack, before police are able to respond.

MTAs can take many forms and include a combination ofthe following:

It is more important than ever that your venue is aware of the heightened risks and adequately prepared for any potential attack.

New and detailed guidance is now available providing information as to the range of measures that can be taken to minimise the impact of an attack and help save lives. These measures range from implementing simple changes to security processes and technical systems to introducing new and sophisticated security systems. This guidance sits alongside the Run Hide Tell campaign, which is designed for general members of the public.  The MTA guidance is designed to help organisations develop a security plan, based on the principles of RHT.

CPNI have also produced a short film which introduces the quick actions a member of staff within a small business can take to lockdown their premise during a terrorist incident, the principles of which can be applied across many types of locations.

Full guidance and advice on MTAs, including the short film ‘Café Lockdown Drama’, is available online at https://www.cpni.gov.uk/marauding-terrorist-attacks-1

Due to the nature of MTAs, licensed venues including pubs, clubs, restaurants, theatres, arenas, and music venues are at a particularly high risk, with large numbers of people gathering regularly.

Mark Morgan, Licensing SAVI, is keen to share the CPNI guidance and resources with venue owners and managers, saying: “This is a really useful video which we are extremely keen for all staff working within hospitality to watch and learn from the content and supporting guidance. I’m confident that implementing simple measures can often make a big difference. We know that hospitality venues and crowded places are attractive targets, so it is imperative that those working in the industry are best prepared and play their part in deterrence. Do you know what you can do to help?”

Police CPI’s Licensing Security & Vulnerability Initiative (Licensing SAVI) seeks to improve safety and security in licensed premises. Developed at the request of the Home Office, Licensing SAVI is being supported by the National Police Chiefs’ Council and Project Servator, which seeks to deter terrorist attacks in public places.

Licensing SAVI is a police-led initiative which encourages venues to improve their operational security and management practices year-on-year using an online self-assessment, which includes all the police and council licensing information that venues need to meet statutory licensing requirements for safety and security. Venues can be awarded a star-rating and apply for Licensing SAVI accreditation.

Licensing SAVI was among the organisations to take part in the ‘Protect Duty’ consultation and submit representations.