Operation Shield extended after 83 per cent drop in burglary

Operation Shield, Cheshire Police's wide reaching anti-burglary campaign using SelectaDNA, has been a huge success since its launch in March 2015.

The initiative, which has seen thousands of homes, shops and local businesses protected, has now been extended to include rural homes and schools. It was recently extended to the market town of Frodsham after success in other areas of the county which has seen burglary drop by up to 83%.

Cheshire Police has already recorded the lowest number of domestic burglaries for the month of March in 25 years.

Following these encouraging crime reduction figures, SelectaDNA will now be distributed across Chester and three other local beat areas to rural properties to protect horse tack and farm machinery, and to schools to protect valuable ICT equipment.

Every person arrested in Cheshire is being screened by police under a special ultra violet light in custody. If they have committed a crime in an Operation Shield area, they will be marked, and the unique DNA will link them directly to the individual crime scene.

So far, more than 3,000 suspects have been screened in custody for traces of SelectaDNA as part of Operation Shield.

Chester North Community Sergeant Ian Wilson said: "The DNA system is unique to each address and helps to identify stolen items if they are recovered – no matter where in the country they are found. As well as helping to recover stolen property, offenders committing crime can also find themselves marked with the forensic liquid – this stays on their hair, skin and clothes and cannot be washed off. Criminals will not be able to see it in normal light – but police officers will."

Sgt Wilson added: "We recover a lot of items, which are believed to be stolen, but often struggle to reunite them with their owners simply because we have no way of knowing who they are. With this system your property can be traced back to you quickly and easily even if it is recovered from the other end of the country." 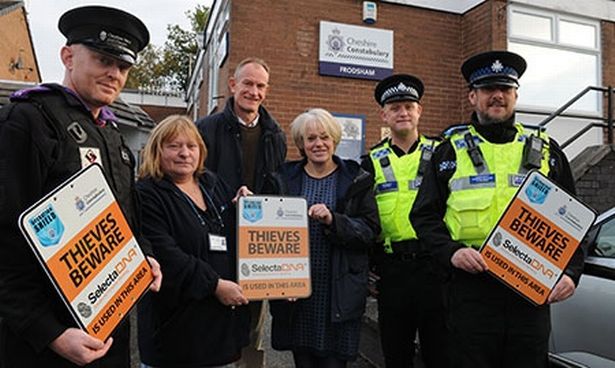