Based in a fourth floor office with a window view overlooking one of the country’s most awe-inspiring cathedrals with a backdrop of the rolling hills of the Dartmoor National Park, Exeter Business Against Crime (EBAC) Co-ordinator Gary Clifton admits there are days when he scarcely has time to look up from his desk.

With a pivotal role liaising with the City Centre police and the Council’s Community Safety Partnership, it’s Gary’s job to encourage his 150 EBAC business members to take an active part in reducing crime and continuing to make this historic and favoured tourist location a safe place for people to live, work and visit.

In the three years he has been EBAC Co-ordinator, Gary has:
- increased membership by around five per cent
- brought the number of radios up to 265 including 18 being used by cathedral staff
- established a close working relationship with police
- established effective policies to combat crime and anti-social behaviour
- compiled comprehensive EBAC business and operational records and documented the benefits of membership.

EBAC’s achievements have been recognised with a Business Crime Reduction Partnership (BCRP) Award from Police Crime Prevention Initiatives (PCPI), a national police organisation, which works alongside the police service to encourage and deliver safer communities.

The BCRP accreditation process is based on a set of standards owned by the National Business Crime Centre (NBCC) and include good management practices and procedures such as membership agreements, data security and compliance with current legislation. It includes having robust information for members and partner organisations that is up to date as well as making it easily accessible 24/7. For some BCRPs, the standards will include the use of CCTV and radio links with members. 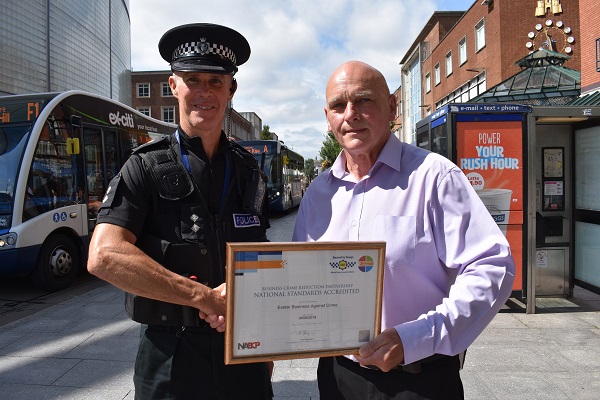 Today, Gary’s focus is on building the relationship with business members to use all the tools and services available as part of their membership to reduce crime and anti-social behaviour. Among his most pressing concerns are shoplifting – both opportunist and professionally organised; ‘aggressive begging’ near ATM machines and through close-proximity intimidation; and what he calls ‘street attached’ issues, such as homelessness combined with alcohol and drugs dependency.

To help combat these offences and behaviours he has collated all the best practice for members into a single-sided A4 sheet, which he calls the ‘EBAC Pledge’. It includes:
- switching on and monitoring the radio to find out what’s going on in real time, for example, when suspects enter member premises
- registering and using the local offender alert system called the ‘Database and Intranet for a Safer Community’, known as DISC, to keep up to date with information about current offenders. DISC can be accessed by computer and app
- reporting incidents via DISC to gather intelligence and build a bigger picture of what’s happening in Exeter City Centre to enable collective action to be taken against offenders. DISC also enables reporting via the national 101 police reporting number.

Gary also wants members to take up his offer for training at any time convenient to member businesses and come along to quarterly meetings to network with other members and learn what’s going on in the city.

He said when he can get the time with members to explain how they can help reduce crime they can become very committed. Gary said he trained two female staff at a ladies clothes shop and they are always on the lookout for shoplifters and don’t let them in when they see them. “They use their radio and the DISC, they come to meetings and are totally on the ball – and they don’t tend to have problems anymore.”

Whereas another clothes shop that reported taking a big hit from shoplifters, may not have switched on their radio or registered to use the DISC, despite Gary going along to show how the equipment should be used.

Gary explained: “I want to encourage members to use what they are paying for. I liken it to gym membership: Why join a gym if you are not going to turn up and train?”

Lack of engagement by members of Business Crime Reduction Partnerships has been highlighted as a national problem in academic research with retailers focused on core business pressures, such as the need to increase sales in a competitive marketplace and reduce costs by keeping staffing to a minimum.

Gary’s commitment to his retail, pub and club members stems from the ‘can do’ attitude ingrained during his career in the Royal Marines where he learnt the importance of effective communication, training and working together in order to achieve the best possible solution to problems.

Gary started with Exeter City Council in 2005 and became what he describes as ‘a jack of all trades’ working with the environment department on pest control and trade waste carrying out enforcement work within the city. His work for the licensing team included inspecting premises such as public houses and bookmakers and issuing licences to taxi operators.

Three years ago, Gary was seconded from council to take over the running of EBAC which is a self-funded, non-profit making organisation for the benefit of the members and had been set up in 2006. Operating out of a small office near the Cathedral Yard, Gary continues to benefit from Council support for his accounts and IT functions.

He continues to be a regular visitor to Civic Offices five minutes walk away where the City Centre Police now occupy the ground floor. “I’ve got to know many of the police officers over the last couple of years and we have developed a good relationship and when possible share information between each other.”

Gary has noticed that homelessness and begging in the city rises during peaks in the tourist season and falls away noticeably during the winter months. Exeter is well organised in terms charitable, voluntary and statutory organisations combining to make accommodation, food and drink available for those who need it, but there remains a number of people who decline any help.

He urges residents and tourists not to give money in the street because it’s likely to be spent on alcohol or drugs.

Exeter Local Policing Inspector, Simon Arliss, said: “Gary and I are in very frequent contact. The more we can work in tandem with EBAC and businesses to prevent crime the better. They can provide us with a real clarity of information and help us focus our resources on the areas of greatest concern,” he said.

Guy Collyer, of PCPI, said: “EBAC has achieved significant strides in a short period of time. This is an excellent example of partnerships within a community joining forces to prevent crime and make places safer. They should all be very proud of what has been achieved.”

David Wilson, Executive Board Member of the National Association of Business Crime Partnerships (NABCP), which was the assessing authority for Exeter’s accreditation, said EBAC is a well-run, compliant scheme that is supporting its local community. “EBAC is developing an increasingly central role in helping vulnerable people in the city centre and based upon all the evidence I have seen, it is an excellent scheme that will continue to progress for the benefit of all.”