A 150-home development on a former school site in Epping was the first time that Essex Police and officials from Epping Forest District Council had got together in a formal way to incorporate crime prevention measures into the landscaping and layout, and physical security of properties, on a new build estate.

Consultations about St John’s Senior School selling part of its large grounds to housing developers had been going on between the Council, school authorities and developers since the early 2000s.

The school had been extended over the years with prefab type buildings to accommodate a growing number of pupils but was no longer deemed appropriate for 21st century education. 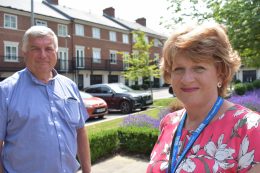 Paul Gardener, of Epping Forest District Council and Heather Gurden, of Essex Police at the development

The plan was to replace the old school with a new school building on the same site, part paid for by the sale of the remaining school site for development of private, rented and shared ownership homes.

These planning discussions were at an advanced stage when Epping Forest District Council became one of the first local councils to take the innovative step of working closely with local police and Secured by Design (SBD), the national police crime prevention initiative, to ‘design out crime’.

Despite the plans being close to final agreement, the SBD trained officers from Essex Police, who are embedded within the Council’s Community Safety Team, were able to introduce a number of security improvements before building work commenced.

These included the use of CCTV in flats to sufficient quality that could be used to provide evidence in Court if necessary. In addition, SBD principles were included in the landscaping and green spaces particularly around a public path through the estate to the school. The height of the proposed grass bund between the houses and the path was lowered and the amount of planting, such as the number of trees, was reduced. Both measures served to increase visibility and improve security for children going to and from school. In addition, cabling was installed under the path so lighting could be installed at a later date. The Council has pledged that it would install lighting to prevent crime and anti-social behaviour if it proved necessary.

An SBD compliance certificate, as it was known then, was awarded to the developer, Higgins Homes, to recognise their work in meeting SBD standards.

Today, on sites where developers incorporate security successfully in to both the built environment, such as through the use of natural surveillance, landscaping, lighting, fencing, gating and other measures, and physical security of buildings, such as SBD police accredited doors, windows and skylights, an SBD ‘Gold Certificate’ will be awarded to recognise that both these elements have been met.

This housing development, which was completed in 2016, proved to be a milestone for the Council because it marked the start of police and Council officers in the Community Safety Team working with planning and housing officials prior to planning application stage to consider how all new developments submitted by independent and commercial builders can implement SBD security guidelines for both the built environment and physical security.

Paul Gardener, Community Safety Officer, Epping Forest District Council, said: “We wanted to create a safe environment for everyone on the estate, including children, mums with young children and elderly residents and we have not received a single report of any criminal or anti-social behaviour from the estate since it’s been built. We have learned a lot from our involvement in the development and we are incorporating SBD security measures into the Council’s build programme for new developments and refurbishments at every opportunity.”

Heather Gurden, Strategic Designing Out Crime Officer, Essex Police, said: “SBD provides a positive platform for collaborative engagement with developers working directly with our community safety partners. The more you work with developers to make them aware of SBD and designing out crime, the more they want to take it on board and use their experience gained on previous sites, on their new sites. The result is greater readiness to consider security and ultimately, provide better and safer sites for residents.”

The Council’s Community Safety Team, which seeks to create safer communities and protect vulnerable residents, is using SBD police accredited products, like doorsets (the door and its surround), to help protect victims of domestic violence, as well as having police accredited fitters as part of their Homesafe Scheme to install SBD products that could slow up an intruder such as window locks and door viewers to protect vulnerable residents.