A company manufacturing secure metal storage buildings has been recognised in this year's Queen's Awards for Enterprise for its impressive export achievements.

The company is best known for its high-security bicycle and motorcycle storage buildings: Protect a Cycle and Protect a Bike.

Both of these products are approved by the Loss Prevention Certification Board and Secured by Design (Police Preferred Specification), they have also been tested and recommended by the leading cycle and motorcycle press.

Speaking about the accolade, Trimetals Managing Director Garry Smith said: "We're incredibly proud of our 49 year heritage as a manufacturer of British products and this award will further strengthen our efforts globally where we are finding increasing respect for good design, quality construction, security and durability. It's also particularly satisfying to know every product we ship is not only made entirely by our team here in Dorset but also utilises PVC-clad steel which originates from the steelworks of Great Britain."

Trimetals also produces a wide range of metal garden sheds and storage units for lawnmowers, tools and patio furniture. These premium products are also utilised by numerous companies and organisations, such as landscapers, golf and football clubs and over 4,500 schools.

This Queen's Award is the second royal badge of honour for Trimetals, with its products having recently achieved status as the only metal sheds and garden storage approved by the Royal Horticultural Society.

At home in the UK, Trimetals' attention to build-quality and functionality has earned it deals with major retailers including B&Q, Argos, Homebase, Sainsbury's, Wickes, Screwfix, Travis Perkins and Jewsons. The company also sells directly via its website www.trimetals.co.uk 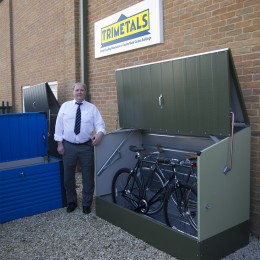