Yorkshire-based manufacturer, Heald has announced the success of two crash tests for its award-winning, sliding bollard system, the Matador.

The firm, a Secured by Design (SBD) member company based in Hornsea, East Yorkshire, design and manufacture a range of products and solutions to protect high profile buildings and pedestrianised areas from the threat of vehicle attacks.

Heald’s SBD accredited HT3-Matador 4, which has already been previously crash tested to IWA standards, has achieved a new record with an IWA crash test against a 7.2 tonne N2A specification truck travelling at 80 kph (50 mph). 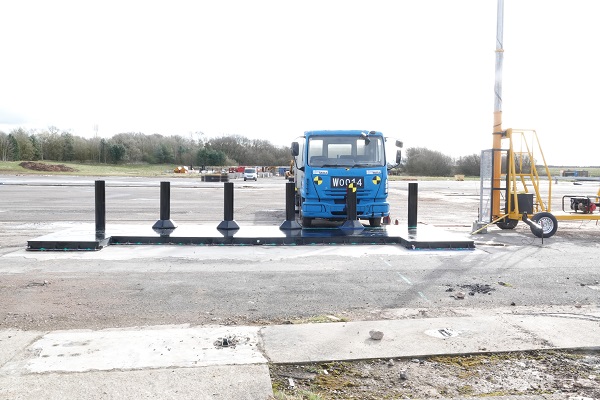 The IWA crash test is the world standard in crash testing and has been prepared by the Centre for Protection of National Infrastructure (CPNI) and British Standards Institution (BSI) with input from the US Department of State and combines aspects of PAS68 and ASTM (American standard) crash testing requirements.

As Heald continues to innovate the patent-protected Matador range, which has recently seen the launch of an electro-mechanically operated range removing the need for oil to operate and up to a 60% reduction in electrical running costs, they have continued to invest in crash testing to provide the market with a trusted solution to mitigate the risk of vehicle attacks. To date, Heald’s Matador Range has been crash tested four times, with each test covering a variety of standards. After each test, the Matador continued to function, mitigating the risk of secondary attacks.

Due to its sliding bollard feature, the Matador range can be shallow or surface mounted making the product ideal for install in locations where excavation can be challenging due to existing infrastructure such as underground cabling and drainage. The surface mount option is ideal for short term events such as festivals and Christmas markets due to its rapid installation, while still providing the same levels of protection as its shallow mount counterpart.

Matador installations include a government facility in Melbourne, Australia and secures the perimeter of one of Norway’s airports, New Orleans historic French Quarter and the Stavros Niarchos Cultural Centre in Greece. Surface mounted Matadors have also secured the World Snooker Championships and the London Olympics.

Commenting on the crash tests, Heald Managing Director, Debbie Heald MBE said “As part of our commitment to providing products which push the boundaries we are committed to putting our Matador up against some of the most stringent tests on the market to ensure we can provide products which protect from the most extreme threats. “The latest crash tests cement Heald’s Matador as one of the world’s most effective HVM bollards”.

Secured by Design Development Officer Alfie Hosker said: "This rigorous testing of their products once again demonstrates why Heald continue to be the go to company in their field”.

Heald is one of the largest manufacturers of security equipment in the UK and has been a member of Secured by Design, the national police crime prevention initiative, for many years.

You can find out full details of Heald’s extensive range of SBD accredited products here: https://www.securedbydesign.com/member-companies/sbd-members?view=companydetail&sbdoldcompanyid=110