Seen a stolen bike for sale online? You can now message the owner direct to alert them

Bike theft can have a massive emotional impact on cycle owners with many feeling it as deeply as they would the loss of any treasured possession.

In fact, 81% of bike owners were left emotionally affected by their bike being taken, with annoyance, anger and shock being the main emotions experienced (Office for National Statistics Crime Survey).

Bearing in mind the trauma that many bike owners go through when their bike disappears, a valuable new service has been launched for BikeRegister members that allows the general public to message them direct should their beloved bike be seen listed for sale online.

Members can now list their own stolen bike in the BikeRegister Stolen Bikes gallery. From the gallery, members of the public can then use the ‘Message Owner’ button to contact the owner directly.

To help with the search for a stolen bike, users can also share details of bikes listed as stolen to their own followers via Twitter and Facebook.

When a bike recovery happens, owners have the option to publish the good news to social media and have their bike featured in the Recoveries section of the BikeRegister website, which shows the ever-increasing cases of stolen bikes being recovered by police, the public and owners. 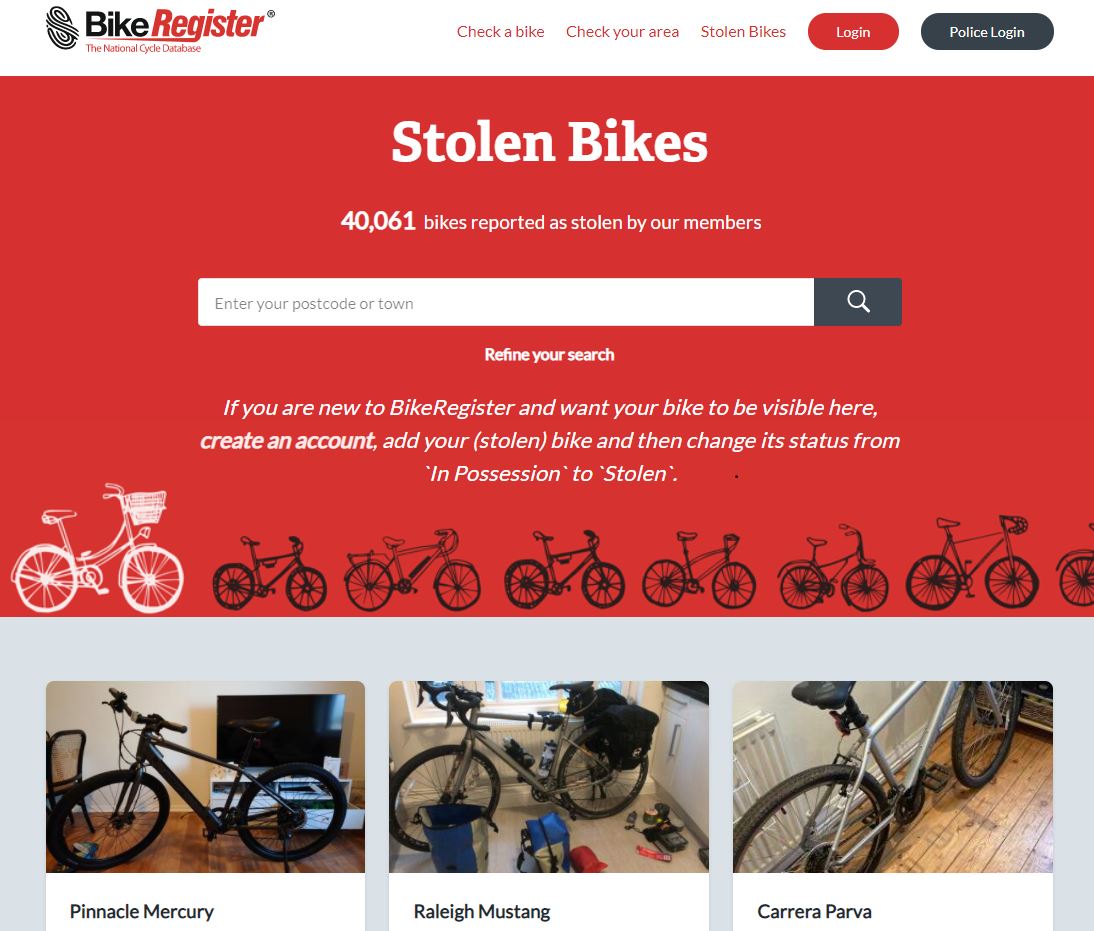 “I found my bike being sold online 16 days after it was stolen. I met the seller with police back up and recovered it. Police arrested him. The bike is now safe with me.”

BikeRegister is a Secured by Design member company, having achieved Police Preferred Specification. All UK Police Forces use BikeRegister, the UK’s national cycle database, to search for stolen and recovered bikes. BikeRegister recently announced its millionth registration to the service.

Over 1,000 searches are made on BikeRegister each day by the police, retailers and members of the public, making it an essential tool in the fight against cycle crime. BikeRegister has helped return thousands of stolen bikes to their owners.

Another service offered to BikeRegister members allows anyone thinking of buying a bike to quickly check its details on the site to see if there is a record of it having been stolen. This is done through its free BikeChecker feature on the website.

In other news, BikeRegister is set to hold its latest Cycle Crime Conference in July. It is the only national security event focusing on cycle crime that is held annually. At the conference, key members from the police, government, security and cycle industry will address delegates on the latest ideas to tackle cycle theft.

Other plans for 2021 include expanding into Europe after BikeRegister’s successful launch in Ireland in 2019. The service recently launched in France after the French government made the marking and registration of all new bikes compulsory.