The Business Crime Reduction Partnership for Staffordshire received the highest praise for the way it works effectively with local police officers when it successfully renewed its National Standards Accreditation from Police Crime Prevention Initiatives (Police CPI), a police-owned organisation that works alongside the Police Service to reduce crime and build safer communities.

Over the years more business groups set up elsewhere in the county to safeguard their local daytime and night-time economies. Each was managed separately and had their own identity, funding, governance, processes, policies and strategies.

However, by 2012 police were looking for a more strategic and consistent way of working within a single organisation with one over-arching manager that could oversee all retail and pubwatch schemes in the county. This is when PABCIS, which was launched in 2007, started to operate under its current structure.

During the last 20 years PABCIS has operated out of Hanley Police Station in Stoke-on-Trent City Centre and has been part of the Business Crime Strategy for many years.

However, in recent years, senior officers have increasingly recognised how PABCIS brought organisations together to share information, understand crime trends and respond to them – to help reduce crime and make the county safer for everyone to enjoy.

This led to PABCIS in 2018 moving into its current home in the resolution centre, a desktop investigation unit where police officers investigate crimes that don’t require an immediate response.

Today, PABCIS runs a network of 26 retail and pub groups incorporating 900 member businesses to reduce crime in town and city centres around the county.

The BCRP renewal assessment, which marked two years of accreditation, was carried out by David Wilson, Executive Board Member of the National Association of Business Crime Partnerships. David heralded PABCIS as an ‘excellent partnership that continues to improve’.

David stated: “PABCIS is a centre of excellence and their integration within the police intervention centre is second to none, leading the way in joint working. Previously the County was split into six BCRPs and now they are all covered within one county scheme with common documentation and working procedures. I have no hesitation in recommending them for the renewal of their National Accreditation,” he said.

In the five assessment categories – Overview and governance structure; Partnership, benefits, aims and objectives; Communications; Systems and Procedures; and Data integrity – containing a total of 56 standards, 19 were deemed to exceed requirements whilst 37 met the standards. Six of the eight communication standards were judged as exceeding standards. 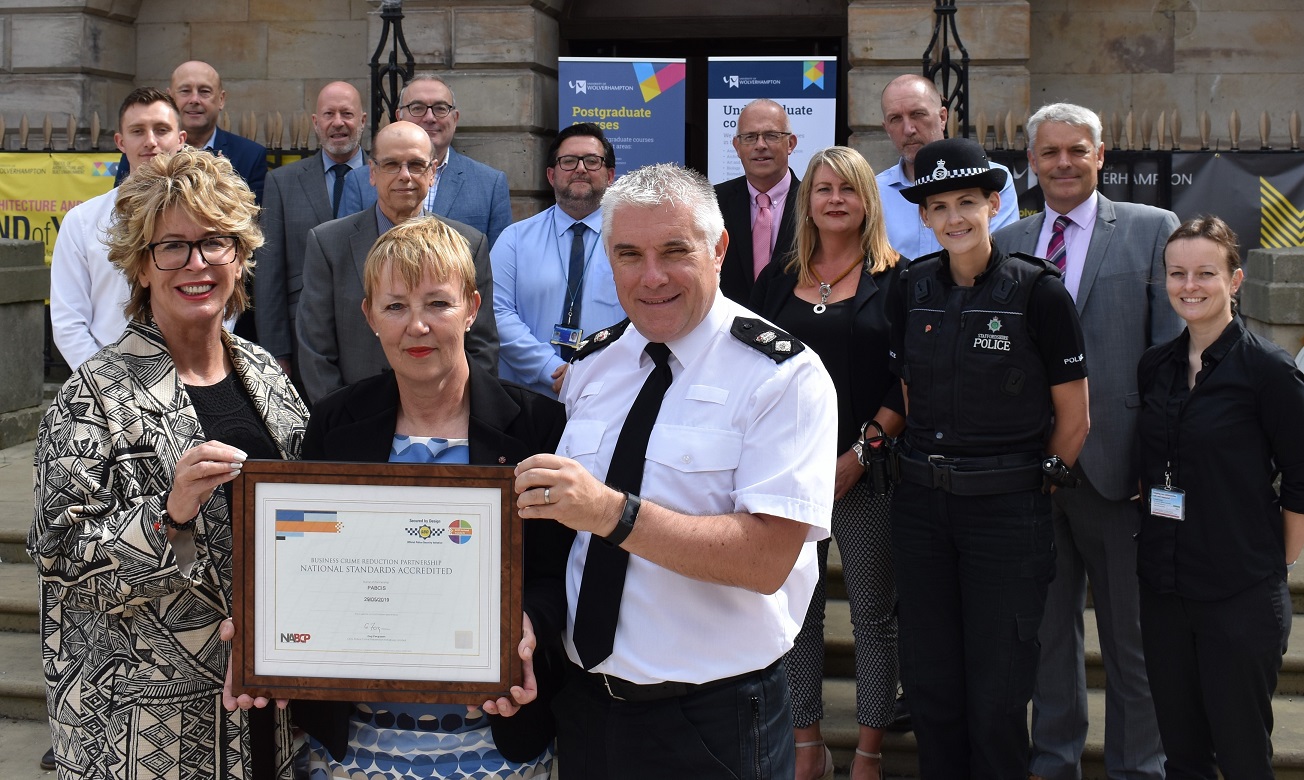 Julie Davies, OBE, who has overall responsibility for PABCIS, (pictured above in the centre foreground holding the certificate presented on the steps of the Guildhall, Stafford Town Centre, during the summer of 2019), said: “We are delighted to have been re-accredited for a further two years and look forward to working with our business members to further develop the successes of PABCIS.

“Whilst I have taken the lead on PABCIS utilising my many years of experience in helping to tackle crime affecting business, the success is down to the engagement of our members and the team at the PABCIS Hub who thoroughly deserve recognition.

“I am grateful for the support of our partners, particularly Staffordshire Police who recognise the benefits of partnership working at a local level and together we will work to deliver the business crime strategy which highlights PABCIS as one of the key players.

“The impact of business crime on those who work, live, visit and invest in Staffordshire cannot be underestimated – by working to a common national standard ensures that we continue to deliver in order to achieve our objectives,” explained Julie. (Photo below shows Stafford Town Centre). 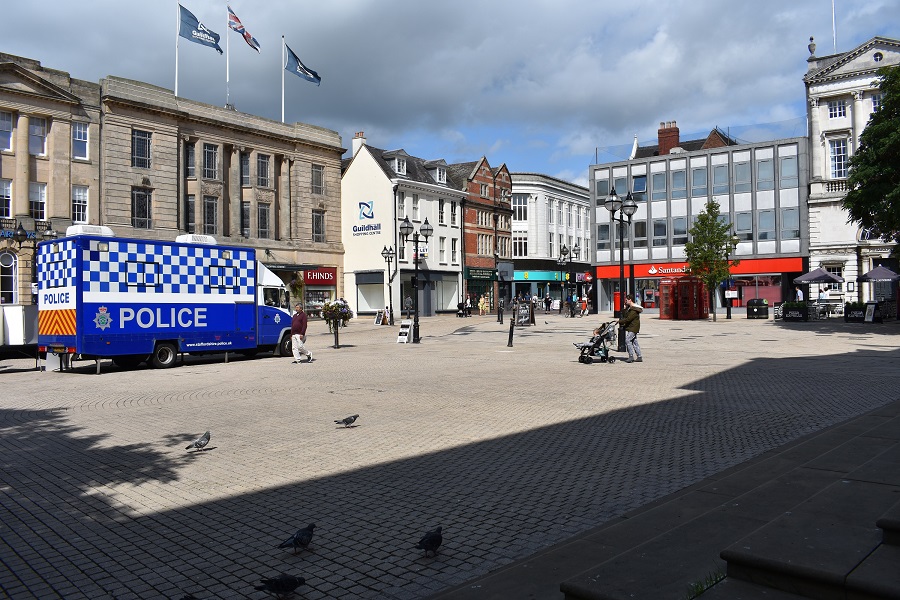 Highlights from the assessment included how:

- their action plan for the forthcoming year is produced and set at its annual general meeting
- they achieve funding from a variety of sources and have just completed the fourth year of a four-year financial support programme from the Police and Crime Commissioner
- they link with the strategic aims of key partners like Staffordshire Police, such as being part of the Staffordshire Business Crime Agenda and Business Crime Action Plan
- they measure performance, such as via feedback from members and by numbers of warning letters and exclusions served
- they feedback to members, such as alerts on PABCIS’ secure system, emails, minutes of meetings, twitter messages and individual notifications.

The BCRP accreditation process is based on a set of standards owned by the National Business Crime Centre (NBCC) and include good management practices and procedures. It includes having robust information for members and partner organisations that is up to date as well as making it easily accessible 24/7. For some BCRPs, the standards will include the use of CCTV and radio links with members. (Another photo below of Stafford Town Centre). 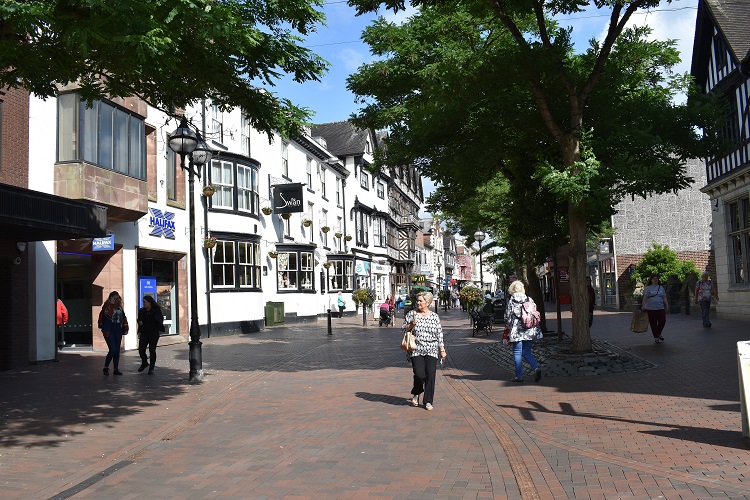 About BCRPs
BCRPs are subscription-based, business-led, non-profit making action groups, often associated with Business Improvement Districts (BIDs), working with police forces and local authorities to gather intelligence and share information to tackle crime and disorder affecting businesses from multi-chain retailers and small independent shops through to pubs, restaurants and nightclubs. It is estimated there are approximately 400 BCRPs operating in the UK. They seek to make their local communities safer places to live, work and visit.

About BCRP Accreditation
Police Crime Prevention Initiatives (PCPI) has become the accreditation body for Business Crime Reduction Partnerships (BCRPs). The accreditation process is based on a set of standards owned by the National Business Crime Centre (NBCC). The standards include good management practices and procedures such as membership agreements, data security and compliance with current legislation. It includes having robust information for members and partner organisations that is up to date as well as making it easily accessible 24/7. For some BCRPs, the standards will include the use of CCTV and radio links with members. The aim is to recognise good practice and professionalism to ensure BCRPs are functioning in an ethical manner and within the law, specifically checks to ensure compliance with the General Data Protection Regulation. It is expected that accreditation will enhance the level of partnership working nationally and encourage continued, significant, national business investment in BCRPs. In addition, the intention is that it will provide reassurance to police forces that data shared with BCRP partner organisations will be utilised in a responsible manner to reduce criminal activity.

About Police Crime Prevention Initiatives (Police CPI)
Police CPI is a police-owned organisation that works on behalf of the Police Service throughout the UK to deliver a wide range of crime prevention and demand reduction services. It maintains close working links with the National Police Chiefs’ Council (NPCC) National Leads and Committees. Senior police officers are Police CPI Board Members and control and direct the work Police CPI carries out.
Visit: www.policecpi.com