The process used by York-based Trace-in-Metal involves infusing thousands of microdots into metal sheets ‘marking’ them with a unique identifying code.

Such is the science behind Trace-in-Metal, which is led by a former police detective and a Swedish ballistics expert, that even the smelting process cannot destroy the nickel dots and their unique tags.

To achieve Secured by Design status, this unique deterrent, which is currently protecting scores of roofs on churches, stately homes and public buildings in Cumbria, Yorkshire and Lincolnshire, had to pass a series of standards and stringent tests conducted by independent laboratories.

These test the product’s effectiveness in preventing or reducing crime, usually by resistance to physical attack.

Secured by Design works on behalf of Police Forces throughout the country and uses proven crime prevention techniques to reduce crime through environmental design to create secure spaces at the design stage and to set product standards that achieve ‘police preferred specification’.

Trace-in-Metal Chief Executive John Minary said: “Being awarded Secured by Design status really is the jewel in our crown. It is a massive vote of confidence in our system and will give potential clients the assurance to know that Trace-in-Metal is a highly regarded crime prevention product.

“To be a Secured by Design member we have had to undergo rigorous scrutiny and testing. I’m delighted we have passed and we now join an exclusive club.”

The Association of British Insurers has estimated that the introduction of Secured by Design standards across the UK would bring more than £3.2 billion worth of savings to the economy over 20 years.

Secured by Design Development Officer Alfie Hosker said: “This is a really exciting crime prevention product. It is easy to apply and effective because it is uniquely traceable, even after the smelting process. This is a great deterrent to any opportunist thief or more determined, organised criminal. It will help to lead theft from heritage sites and church roofs through to locations where lead is used within the fabric of the building or structure.”

Last year Trace-in-Metal, which was officially launched at Ripley Castle in the summer of 2014, was awarded a £120,000 government innovation grant.

The match-funded money – given by Innovate UK – has enabled Trace-in-Metal to further develop its revolutionary metal marking system and to help garner vital third party accreditations, including that of Secured by Design.

Further information about Trace-in-Metal is available from its website: http://www.trace-in-metal.com 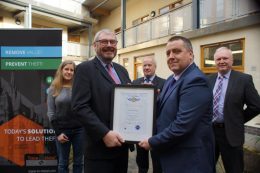