A traffic management, stewarding and security company put together detailed plans at very short notice for the reopening of six waste and recycling centres in North London following the Government’s easing of coronavirus lockdown restrictions – before deploying its own staff with specialist police powers to manage the queues and ensure the flow of through-traffic.

Commissioned by the North London Waste Authority (NLWA), The Combined Services Provider Limited (CSP), a Watford-based company, had just one week from initial enquiry to live operations to design and implement a detailed plan for the reopening of sites in Barnet, Chingford, Haringey, Islington, Leyton and Walthamstow.

The plans had to be approved by each of the respective local authorities and the Metropolitan Police, along with arranging traffic management signage and manufacture of 20 Covid-19 signs.

At the same time, CSP were also approached by Surrey Police – also with about a week’s notice – to assist with the reopening of eight waste sites, with four of them at Earlswood, Guildford, Leatherhead and Woking requiring staff with police powers (see the next three photos below). 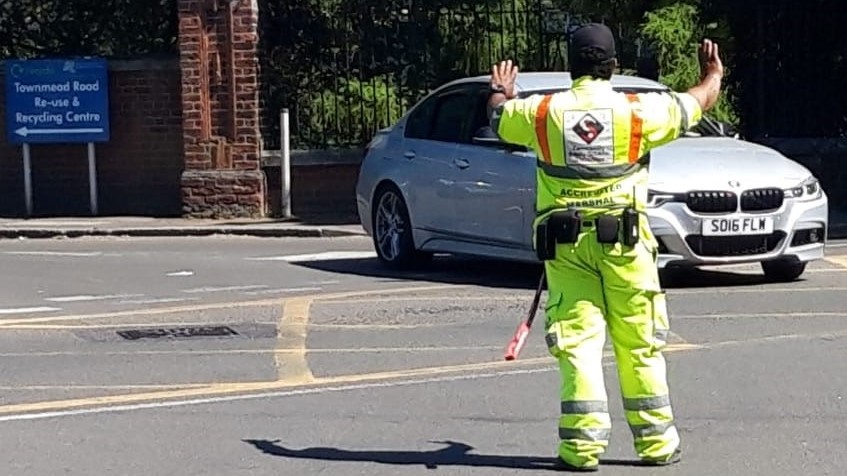 Their staff were accredited with certain police powers in London by the Metropolitan Police Commissioner and in Surrey by the Chief Constable under the Community Safety Accreditation Scheme (CSAS), a voluntary scheme, contained in Section 40 of the Police Reform Act 2002.

The role of assessing private sector companies seeking approval to run a CSAS scheme is carried out on behalf of the National Police Chiefs’ Council by Police Crime Prevention Initiatives (PCPI), a police-owned organisation that works on behalf of the Police Service throughout the UK to deliver a wide range of crime prevention initiatives.

CSP’s CSAS responsibilities include managing safe vehicle movements in the queues to the sites and at key junctions and roundabouts near the sites whilst minimising impact on local residents and through traffic.

At the NLWA centres, which are allowing residents to pre-book online to dispose of any household or garden waste that would put them at risk of harm in their home, CSP carried out a total of 80 CSAS shifts at the six sites between 13-19 May.

At the Surrey centres, which originated from a request by the Surrey Police CSAS Liaison Officer, CSP’s focus was on providing CSAS staff to assist as Surrey County Council had designed traffic plans, signage and equipment. From 11 May, CSP was initially contracted for 167 CSAS shifts at the four sites, which are allowing cars only and only one black bag of waste and garden waste.

However, due to the success of their operations in Surrey, CSP’s role at Guildford was extended from 15 May to the end of May.

CSP also received a referral to assist with the Recycling Centre in the London Borough of Richmond where CSAS shifts began on 18 May and will run until the end of June. 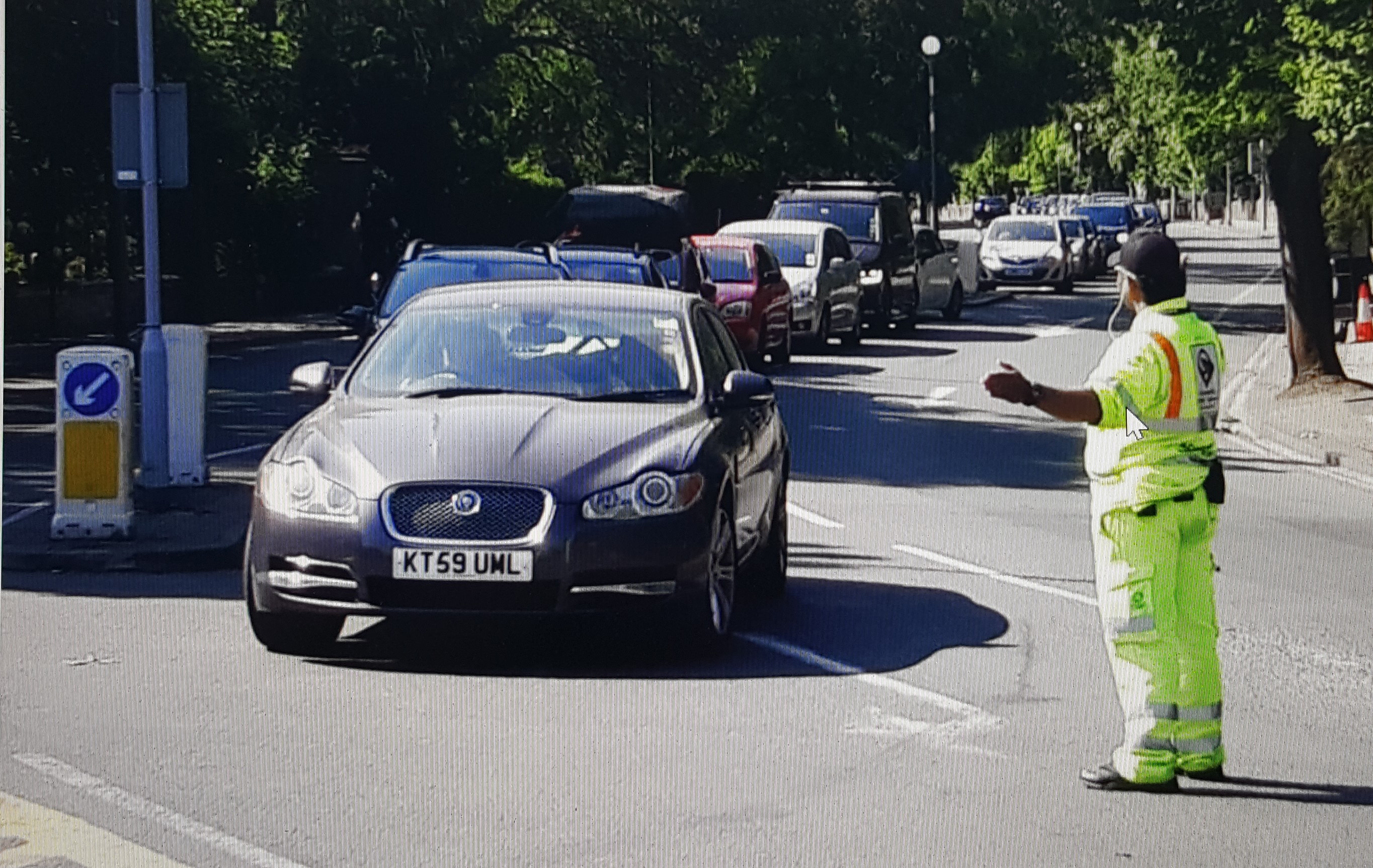 Tony Nikolic, Managing Director, CSP, said the NLWA had been passing on CSP’s details to other local authorities encountering traffic problems at their recycling centres. Feedback in Surrey had been positive too, he said. “We have several sites looking to extend our presence onsite and rebook our services in the future when the sites are allowed to ease their restrictions further.”

Since 12 May, CSP has also provided CSAS staff to assist with the launch of the drive-through NHS Coronavirus Test Centre at North Greenwich (see photo immediately below). 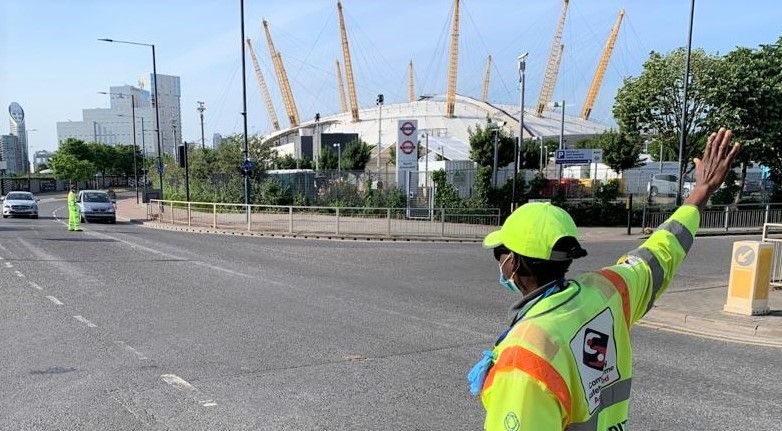 Tony added: “We have found our police contacts in the Metropolitan Police and Surrey Police to be extremely helpful and supportive and we like to feel that after ten years of working with the police we are very much trusted to deploy CSAS accredited staff.

“Given the pressures that the police and local authorities are under currently, we believe that our work at the recycling centres has been vital in allowing these critical services to be reopened and well managed.”

Guy Ferguson, Chief Executive Officer, PCPI, said: “This is an excellent example of where properly trained and accredited staff can help their communities, especially in these challenging times. The CSAS initiative is an excellent route to swiftly provide staff to assist in policing duties, which enables warranted police officers to be utilised elsewhere.”

PCPI Compliance Manager, Ken Meanwell, who leads on CSAS, said: “CSAS accredited officers are now accepted as part of the extended policing family. Traffic management plays a vital role in controlling access to recycling centres, giving clear guidance to motorists allowing business to be resumed whilst ensuring the safety of visitors and staff according to government guidelines.”

Surrey Chief Constable, Gavin Stephens, said: “This scheme has provided extra support to our waste recycling centres and lessened any impact on nearby communities without using up the valuable time of our local officers who are working hard to keep everyone safe.”

Superintendent Elisabeth Chapple, Professionalism Headquarters, Metropolitan Police, said: “CSAS Accredited Persons, whether they are members of private companies or public organisations, play a growing role of importance and benefit to the community. This example shows the flexibility of the scheme in challenging times.”

Andrew O’Connor, Head of Strategy and Services for NLWA, said: “CSP provided a great service by assisting in the re-opening of six of our seven recycling centres in North London. With the help of their CSAS operatives we were able to implement robust plans on the approaches to the sites which prevented excessive queuing and minimised any impact on the road network. We were very grateful for the support CSP Head of Operations gave us in holding our hands through something very new to the Authority.”

CSAS creates a framework for public and private bodies to work in partnership with the police, providing additional uniformed presence in communities and capitalising on the skills and information captured by those already engaged with the community.

All schemes are managed, monitored and assessed at a local level by the responsible police force. Main benefits of the scheme for the Police Service include:

- increasing uniformed presence on the streets (CSAS accredited persons wear the uniform of their employing organisation, with an identification badge endorsed by the local police force)
- saving valuable police time in community safety to deal with low-level crime and disorder
- promoting greater business involvement and partnership working with the police, and allowing the police to influence the training of businesses, such as security companies.

Since CSP’s first event contract in 1994, the company has grown its range of services to specialise in providing traffic management and car parking, security and stewarding, and hostile vehicle mitigation solutions, as well as other services which include cash and audit and consultancy. Well-versed in managing the complexities of major events, CSP now provides a range of services to some of the UK’s most memorable sporting and entertainment events. These have included UEFA Champions League Finals, Ryder Cup golf tournaments between European and USA, the three-day Road Cycle Race for the London 2012 Olympic Games, Twickenham Rugby Stadium match days, and the three Jockey Club Racecourses in London – Epsom Downs, Kempton Park and Sandown Park.
Contact:
Tel: 020 8900 2405
Email:
Web: https://www.gotocsp.com