Cyclehoop has been accredited by Secured by Design

Cyclehoop, a London-based, innovative producer of cycle security, has been accredited by Secured by Design (SBD), the national police crime prevention initiative.

The company was started by Anthony Lau after his cycle was stolen when thieves by-passed his lock by lifting his cycle over the top of a street sign where it had been secured.

Anthony, who at that time was an architecture student, was determined to find a solution to prevent this from happening. So he created a robust, metal Cyclehoop for the 'Reinventing the Bike Shed' competition in 2006. The Cyclehoop went on to win, and Cyclehoop, the company, was founded in 2008.

Cyclehoop, based at an industrial unit in Lower Sydenham, south London, has gone on to develop a wide range of cycle security products for local authorities, transport hubs, shopping areas, businesses and homes.

The company's product range includes ground and wall-mounted racks and stands through to canopies and shelters, as well as cycle wash, air pump and repair stations. Cyclehoop has gone on to win a number of awards.

The Cyclehoop, which is one of the company's products accredited by SBD, has been certified to Sold Secure gold standard – the highest rating in terms of security – the only SBD member company to attain this status.

With statistics indicating that one in six Londoners cycle, Cyclehoop works with all 32 London Boroughs and produces an average of 467 cycle parking spaces per month. Their products, which are flat-packed and easy to assemble, are exported to 16 countries around the world including New Zealand.

A total of 24 of its 30 staff regularly cycle to work with one member of their team cycling more than 30 miles a day to and from home in Surrey.

In 2014, Cyclehoop created a variation to its predominantly orange and green product range when it introduced white and red polka-dot, temporary cycle storage on a Yorkshire leg of the Tour de France in 2014.

The following year, Anthony's team provided an alternative to its Cyclehoop when they worked on a Valentine's Day initiative to create 14, bright red, sign-post mounted 'Love Hoops' for a British Heart Foundation 'Hearts of London' campaign.

Cyclehoop Managing Director, Anthony Lau, said: "We are delighted to have been accredited by Secured by Design as we continue to grow our company and take up business opportunities not only in the UK but also around the world."

Chief Executive Officer, of Secured by Design, Guy Ferguson, who is a keen cyclist, said: "We are thrilled to have Cyclehoop join us. They are a highly creative team who are providing robust security solutions to deter opportunist thieves and help keep bicycles secure."

SBD Development Officer, Doug Skins, said: "We welcome Cyclehoop on board and are pleased that they have gained a high standard of testing to Sold Secure gold standard. We are looking forward to doing more work with this exciting company." 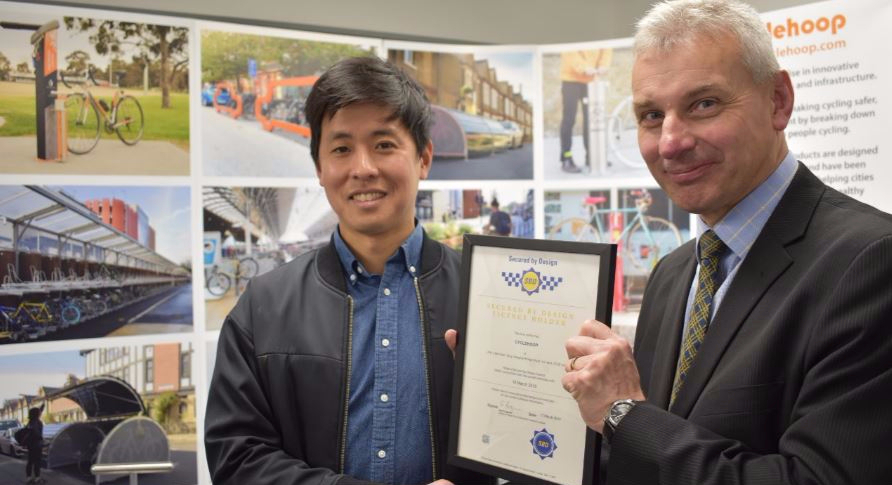