SBD member company, Disklabs, has come up with an effective way to prevent a car being stolen by thieves who use a device to pick up the signal from the vehicle’s key – even if the key is inside the vehicle owner’s home.

Known as ‘relay theft’ there have been a number of examples on TV and on social media recently, where cars parked on a private driveway, have been entered and engine started, even though the vehicle keys were inside the property at the time.

Criminals use a receiver to pick up the signal from the key, which may have been left typically by the front door, to a second unit next to the vehicle – tricking the vehicle into thinking the key is being held next to it.

The car can then be entered and driven away.

Tamworth-based Disklabs’ answer to the problem is a specially designed ‘Faraday’ bag, made from metallised fabric to provide electrostatic and electromagnetic shielding to block the RF signal and prevent theft of vehicles fitted with keyless entry systems.

The Disklabs’ KeyShield, which has been independently tested, is the first RF blocking product to gain Police Preferred Specification from Secured by Design (SBD), the national police crime prevention initiative, which recognises the product’s benefits to reduce crime and the fear of crime.

Simon Steggles, Founder of Disklabs, said: “None of us would knowingly leave our vehicle in an unsecure environment. However, for the owners of vehicles fitted with keyless entry systems, a driveway or car park may be just such an environment. The Disklabs’ KeyShield was developed as a simple and effective way to prevent this.

“We are delighted it has now been accredited with SBD’s Police Preferred Specification,” he said.

The principles behind the science dates back to celebrated physicist Michael Faraday’s experiments in 1843.

In 2004, Disklabs, which has a background in hard drive repair and data recovery, pioneered isolating mobile phones and computers from wireless networks to prevent data being wiped or overwritten as well as providing suitable protection for vehicle keys.

KeyShield is one of a number of Disklabs’ Faraday bag products, which can protect a range of digital devices, including mobile phones, tablets and laptops. 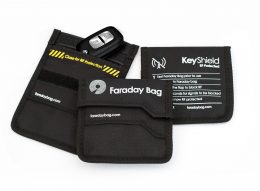