A fast-growing and highly successful business that seeks to help you find possessions you have lost whilst travelling around the world, has become one of the latest companies to be accredited by Secured by Design (SBD), the national police crime prevention initiative.

Since launch in 2001, MissingX has matched more than 1.6million items against those that have been lost with a significant 57% return success rate.

Satisfied customers have recovered their possessions like iPads, mobile phones, jackets, necklaces and bags in as little time as just a couple of hours from places afar afield as California in the USA and Hanoi in Vietnam.

The world’s largest lost and found cloud-based platform, MissingX charges an annual commercial subscription whilst keeping the service free to police and members of the public to search, register, claim and report lost or found property.

Its commercial users include Bagport - Heathrow Airport, Bagport - Arlanda, Oslo, Avinor-Trondheim and Bergen as well as the two main airports serving Paris, amongst the community across the globe.

Describing itself as the ‘Pied Piper’ of the lost and found world, it has become the world’s first and largest online single search database, with millions of items of lost and found property.

The system helps police and insurers identify you as the owner, simplifying police reports and insurance claims and helping to combat fraud and theft with a proven reduction in theft crime of 20% by identifying lost property versus property reported in crime. The system invites the public to prove ownership by uploading photographs and proof or ownership documents.

The company was launched when one of its Norwegian founders lost his bicycle, only to be disappointed by a lack of interest in his misfortune by relevant authorities and too many conflicting and unhelpful systems on the internet – with no single location to search for lost or found property.

Ole-Ray Grodset, CEO, MissingX, said: “In that moment of panic we all feel when we lose something, we offer a helping hand that can lead you directly to your property. We want to provide the largest and most efficient service which delivers the best possible service to our clients and customers getting as close to 100% return rate as possible”. MissingX is listed as an HM Government G-Cloud9 Crown Commission Supplier. 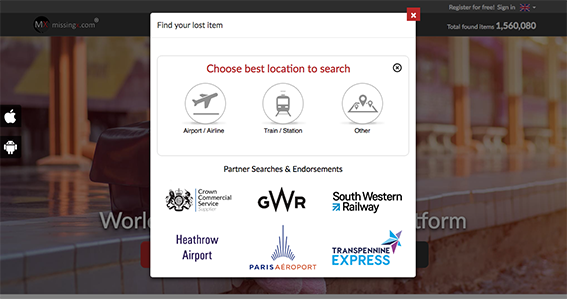