Newly-appointed Hazel Goss was attending Secured by Design’s National Training Event on 6-7 March for the first time in her role as Development Officer.

Hazel had only started her new role the previous week.

She will be responsible for the North West (including Cumbria, Lancashire, Merseyside and Cheshire) and North Wales.

With a background in graphic design, Hazel has always had a zest for the outdoors.
At first Hazel became a traffic warden in Merseyside, but had always wanted to join the Police Service.

Her police career began with the Met Police where her height of 5ft 4in was allowed unlike at home. After seven years in the capital, she moved back north for family reasons and served 23 years in North Wales. The last 13 years have been spent working in crime prevention, community safety and in partnership with Secured by Design.

Hazel said is looking forward to setting up events to encourage companies to join SBD. “The more companies you have, the more product choices builders and developers have,” explained Hazel.

She was awarded an MBE for services to police for her beat officer and community role, but also for raising several thousands of pounds for cancer charities after she was diagnosed with breast cancer. She has since made a full recovery.

Hazel can be contacted on:
Email: 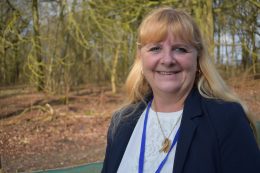 Hazel is responsible for Cumbria, Lancashire, Merseyside and Cheshire