The Secured by Design (SBD) National Training Event 2018 saw four officers receive awards to recognise the contributions they have made to SBD and the Police Service during the course of their careers.

The awards were presented by SBD Chief Executive Officer, Guy Ferguson, and Chief Constable of South Yorkshire, Stephen Watson, who is the National Police Chiefs’ Council lead on crime prevention.

Karl Turton: Commendation
Karl is a Designing Out Crime Officer (DOCO) having worked formerly for the Met Police’s Central Licensing Unit. He has played a key role in developing SBD’s fast-evolving initiative with licensed premises, LP SAVI, which seeks to provide consistent professional guidance on management and processes to protect customers and staff. Mr Ferguson said Karl has shown great enthusiasm and exceptional commitment. “Karl has shared his comprehensive licensing knowledge to make premises safer, and that will prevent crime,” he said.

Stuart Ward: Commendation
Police Scotland’s National Designing Out Crime Manager, Stuart Ward, has been a DOCO for more than 20 years and has delivered a total of 200 SBD awards covering more than 5,000 homes in Fife. Mr Ferguson said: “Stuart now manages 50 SBD trained DOCOs.” A highlight of Stuart’s work during 2017 was Police Scotland’s announcement that there had been an 87% reduction in crime on 3,000 homes on more than 150 Kingdom Housing Association developments in Fife Scotland over the last 20 years.

David Lancaster: Lifetime Achievement Award
With a career in the Armed Services and Police, David has worked as an SBD Licensed Consultant filling in during DOCO absences – an ad hoc retirement that turned into nearly a full-time role. Mr Ferguson said: “David has superb technical knowledge. He is a ‘go-to’ person when we need something done or when we don’t have sufficient resources. He has been one of our best ever ambassadors showing 100% commitment to SBD.”

Mick Reynolds: Lifetime Achievement Award
SBD Senior Development Officer Mick Reynolds retires in 2018 after 45 years working in the Police Service. He joined as a cadet and served as a Police Officer for more than 30 years. His knowledge of SBD was extensive and has been an effective mentor to many DOCOs over the years. Mr Ferguson said: “He has shown great wisdom and a safe pair of hands and has an exemplary track record of dedicated and exceptional service.” 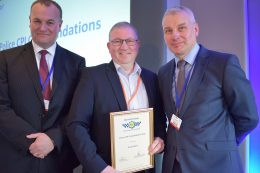 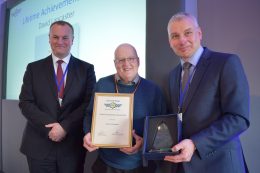 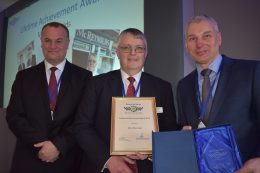