At the time Ian Warmington took over as Co-ordinator of Plymouth Against Retail Crime (PARC), he did so with more than 25 years retail experience under his belt and a desire to provide practical, front-line support to businesses in a way that hadn’t been delivered before in the City centre.

With the very best of intentions, he experimented with taking on two plain-clothes store detectives to combat shoplifting but found they went largely unnoticed by the shops and stores.

So Ian set about creating a team of PARC Rangers, security officers with high visibility uniforms, equipped with body-worn cameras and radios linked to a central control room to provide a front-line deterrence against low-level crime and anti-social behaviour.

Since they launched three years ago, the PARC Rangers have grown into a six-strong team. They work a shift system seven days a week between 8am-6pm operating within the ring road, which borders the City centre.

Trained to provide first-aid assistance, they are often first on scene to help members of the public who collapse or fall in the street or anyone who is the worse for wear through drink and drugs, before paramedics arrive. They also help direct tourists and have become regarded by businesses as ambassadors for the City.

PARC’s achievements have been recognised by a Business Crime Reduction Partnership (BCRP) award from Police Crime Prevention Initiatives (PCPI), a national police organisation, which works alongside the police service to encourage and deliver safer communities.

The BCRP accreditation process is based on a set of standards owned by the National Business Crime Centre (NBCC) and include good management practices and procedures such as membership agreements, data security and compliance with current legislation. It includes having robust information for members and partner organisations that is up to date as well as making it easily accessible 24/7. For some BCRPs, the standards will include the use of CCTV and radio links with members. Ian and some of the PARC Ranger team are pictured below. 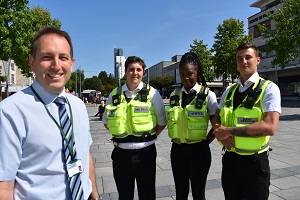 PARC launched in the City centre 2001 with a number of partners including the police, Plymouth City Council, chamber of commerce and retailers. Due to its success, many other organisations have joined including the Youth Offending Service, Devonport Regeneration Community Partnership and Devon and Somerset Fire Brigade.

PARC was extended to the whole of Plymouth, became the UK’s first retail crime scheme to become a limited company and has gone on to receive a string of business, shopping and town centre management awards.

Ian became PARC co-ordinator in 2010 having been appointed as a Director of PARC through his own retail business interests seven years previously.

Having left school to join a youth training scheme with British Homes Stores, Ian proceeded to work his way up the retail management ladder with ASDA and the Co-op. He continues to run two businesses of his own – a shop selling fabrics and wool and another providing schoolwear.

Ian explained: “I’ve seen the business from both sides of the fence. I always felt we could do more for businesses beyond sharing information, receiving photos of offenders and attending meetings.

“I wanted the PARC Rangers to provide a more practical support to businesses – this is especially important as stores can no longer afford to run their own security teams to the extent they did before.”

It was sheer coincidence that the launch of the PARC Rangers took place at the same time as Police Community Support Officers (PCSOs) started to be withdrawn from the City centre as cutbacks in police resources began to bite.

Ian continued: “We have helped to fill the void left by the absence of store security staff and PCSOs. Unless, it’s an emergency, the businesses call PARC before they call anyone else. Businesses feel safer and happier when they know somebody is only two or three minutes away. There’s a quick response and the Rangers can deal with any immediate issues.

“We need people in high visibility clothes so they can provide not only physical reassurance to shops and the public, but also practical help too. We get lots of comments to say it really works and helps vulnerable and elderly people.”

The Rangers, which are provided by a security company called Axien, operate within a Community Safety Accreditation Scheme (CSAS) under Section 40 of the Police Reform Act 2002, which allows police to give permission for persons other than police officers to exercise limited but targeted powers in roles that contribute to maintaining and improving community safety. PCPI has been nominated by the National Police Chiefs’ Council to undertake the assessment of all private sector companies seeking to run a CSAS.

In addition, PARC Rangers, which are licensed by the Security Industry Authority, have specific powers to seize alcohol under the Council’s Public Space Protection Orders.

One-fifth of PARC’s funding comes from the local Business Improvement District (BID) with the remainder coming from fees paid by its 400 member businesses, including shops, stores, pubs and clubs.

Measures managed by PARC to combat crime and anti-social behaviour include 400 CCTV cameras across the city monitored 24/7 by two operators funded by the Council and 220 users on the radio system who receive and share information in real time. Members also have access to shared information and intelligence about offenders on the ‘Database and Intranet for a Safer Community’, known as the DISC system.

PARC can provide training in all these areas as well as police statement training for security staff and store managers and advice on product display and store layout, if required.

Two other specific initiatives launched by PARC include:

Buskers’ Code of Practice: This provides guidance to businesses on how to deal with buskers who play loud music outside their premises and may discourage shoppers from entering their premises. The advice includes explaining the issue in a polite and calm manner during a suitable interval during their music. Buskers may well turn down their volume or move away, and if not, PARC can be called to provide assistance. Ian said they have had no issues now for a couple of years.

Safe Zone children channel: A scheme in which up to 70% of stores in the City centre display a sticker in their front window to inform children who are lost or at risk in some way, that they can enter the premises and be safe whilst help is arranged via PARC who would inform police in urgent cases. Two missing toddlers have been reunited with parents using this system.

All of this work is underpinned by a close and proactive working relationship with City centre officers from Devon and Cornwall Police. There are occasional meetings with the local Inspector, monthly meetings with the local Sergeant, and combined weekly City centre walks with local neighbourhood officers and PARC Rangers – so they all can update each other and share information. Ian was informed recently that police have now set up a dedicated team of officers to investigate reports of shoplifting.

PARC promotes the Devon and Cornwall Police ‘Alert’ messaging system, which is available to businesses by email on computer or a ‘push message’ via mobile phone, and provides information about crime, anti-social behaviour, witness appeals, missing person appeals, community events and local good news. PARC has used it for messages about warnings around forged notes.

Ian’s team also work with a network of local charity and support agencies to support people in need including Shekinah for people in recovery or seeking recovery from homelessness, drug and alcohol issues, offending behaviours and mental ill health; and Plymouth Access to Housing (PATH) whose services include supporting rough sleepers and refugees.

Looking to the future, Ian would like to extend the PARC Ranger services into the evening and night-time economy to support local bars, pubs and clubs, and managing it by reshuffling his existing duties. This would build on Plymouth being awarded ‘Purple Flag’ status in May 2019 to recognise the City’s achievements in reaching high standards for its vibrant and diverse entertainment whilst providing for the safety and well-being of its residents and visitors. He would also like to start a scheme to promote effective car park security.

With a huge investment in leisure, entertainment and business taking place in the next few years in Plymouth from its waterfront attractions to its city centre, Ian said he is committed to making a real difference to businesses and continuing to make the City a safer place to work, rest and play.

Guy Collyer, of PCPI, said: “Everything that has been achieved in Plymouth is commendable. Ian Warmington is a highly motivated and innovative person and his enthusiasm clearly is infectious. PARC is an excellent model and will hopefully be imitated in other areas soon.”

David Wilson, Executive Board Member, of the National Association of Business Crime Partnerships (NABCP), which was the assessing authority for Plymouth’s accreditation, commented: "PARC is a well-managed scheme that has operated to the highest standard for many years. It has a strong sense of its role and the need to provide a quality service for their members.

“It has built a reputation amongst the community based on their integrity and relationships. The scheme has the utmost regard for data compliance and operates securely within this remit. It is a viable scheme that has some strong plans for the future. I have no hesitation in recommending PARC for approval of being certified for the National Standards," he said.

About BCRPs
BCRPs are subscription-based, business-led, non-profit making action groups, often associated with Business Improvement Districts (BIDs), working with Police Forces and Local Authorities to gather intelligence and share information to tackle crime and disorder affecting businesses from multi-chain retailers and small independent shops through to pubs and restaurants and nightclubs. There are believed to be approximately 400 BCRPs operating in the UK. They seek to make their local communities safer places to live, work and visit.

The standards include good management practices and procedures such as membership agreements, data security and compliance with current legislation. It includes having robust information for members and partner organisations that is up to date as well as making it easily accessible 24/7. For some BCRPs, the standards will include the use of CCTV and radio links with members.

The aim is to recognise good practice and professionalism to ensure BCRPs are functioning in an ethical manner and within the law, specifically checks to ensure compliance with the General Data Protection Regulation.

It is expected that accreditation will enhance the level of partnership working nationally and encourage continued, significant, national business investment in BCRPs. In addition, the intention is that it will provide reassurance to Police Forces that data shared with BCRP partner organisations will be utilised in a responsible manner to reduce criminal activity.

About Police Crime Prevention Initiatives (PCPI) and Secured by Design (SBD)
PCPI works on behalf of the Police Service throughout the UK to deliver a wide range of crime prevention and demand reduction services. It maintains close working links with the National Police Chiefs’ Council (NPCC) National Leads and Committees. Senior police officers from each of the four Home Nations are PCPI Board members and control and direct the work PCPI carries out. PCPI is often referred to by its most successful crime prevention initiative, Secured by Design (SBD). More than one million new homes have been built to SBD’s crime prevention standards over the last 20 years with reductions in crime on new developments of up to 87% compared to estates that don’t have SBD measures in place. PCPI is a not-for-profit organisation, which raises its own money at no cost to the Police Service or public purse.