A Secured by Design (SBD) member company that began its business nearly 30 years ago selling pocket-sized personal attack alarms to the public has grown to be a major supplier of a wide range of crime prevention and community safety products at home and abroad.

JNE Security, which is based in a modern office on an industrial estate on the outskirts of Wrexham, supplies all 43 police forces in England and Wales as well as to Police Scotland and the Police Service of Northern Ireland for onward distribution within their own police areas.

The company also supplies local authorities, housing associations, universities, hospitals and corporate clients – including one that purchased over £100,000 of personal alarms in a single order and continues to require more for new staff members.

They supply outside the UK too. They were a big provider of personal alarms to a charity in South Africa and currently supply a number of security companies in Europe.

The company’s 2019 trade catalogue runs to 140 pages and contains details of 500 products, which meet a variety of important standards including SBD, the national police crime prevention initiative, which accredits products that have the capability to deter and reduce crime. JNE Security has been an SBD member since 2005.

This family-run business is headed by Ken Povey, Managing Director, his son Nick Hughes, Marketing Director, and daughter Emma Povey, Accounts Manager. In the early days, Ken’s wife used to be involved too. Photo below shows, from left: Nick, Emma and Ken. 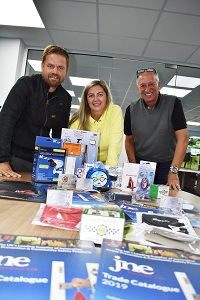 Launched in 1990 JNE Security’s first product, a personal safety alarm, filled a massive gap in the marketplace and was the first of its kind in the country and around the world.

Once Nick joined the business from University, the company began to work towards becoming a one-stop-shop for crime prevention and community safety products.

Although their first alarm was manufactured by a company in Essex, they quickly began to manufacture under licence using their own brand name in the Far East as well as own the tooling for various products. They have been in their current premises for around 15 years.

JNE Security has a regular presence at SBD’s annual ATLAS national training event where exhibitors have unprecedented opportunity to present their best and latest products to Crime Prevention and Designing Out Crime Officers from around the UK.

One of the company’s latest ventures is in anti-fraud products to protect against Radio Frequency Identification (RFID), which is the use of radio waves to capture information stored on a chip. Car keys, mobile phones, payment cards and passports are all at risk unless blocking or disruption devices are deployed.

JNE’s Card Minder Platinum RFID is a single wireless blocking card that inserts into a wallet or purse to protect surrounding contactless cards. If scanned, the card draws energy from the scanner and creates a disruptive field. More than one million contactless cards have been sold.

They also have a range of RFID blocking credit card sleeves, which have been featured on BBC TV’s Rip Off Britain.

A 2 in 1 counterfeit pen: this combines having a Ultra Violet light to check polymer currency notes and a pen to check older notes against being counterfeit.

A driveway and vehicle alert alarm: this assists in preventing thefts of tools and personal items from vans, cars, and sheds.

A distraction burglary alarm: to combat doorstep tricksters who seek to enter the homes of elderly and vulnerable people.

Their business is now around 85% wholesale and 15% retail with its wholesale markets growing steadily.

Nick explained: “All our ideas come from talking to police officers around the country. They tell us what types of crime they are dealing with and we chat to them about how we can help them deter and prevent crime to keep people safe. That’s something we do that has never changed over the years.”

Hazel Goss, Development Officer, SBD commented: “I have known JNE Security for almost 17 years. I first began working with them when I was a Police Officer in my community safety role responsible for crime prevention and designing out crime for North Wales Police.

“It is a pleasure to be working with them again as their SBD Development Officer. It is always lovely catching up with them all as they always make you feel welcome and part of the family.”