The Police Designing Out Crime Officer of the Year Award has been won by Leslie Gipps, of the Metropolitan Police, for the huge contribution he has made in bringing Secured by Design (SBD) crime prevention messages to the public’s attention.

Leslie was a driving force behind the refurbishment of the SBD Garden at Capel Manor College, in Enfield, Essex, which then led to a competition among the college’s garden design students, with the winning entry being shown at the RHS Hampton Court Flower Show.

The garden not only attracted a visit from TV presenter and gardening expert Alan Titchmarsh but also gained widespread publicity, including in the Times newspaper with headlines including ‘Police help create a burglar-beating garden’ and ‘Anti-crime garden is a thorn in burglars’ side’. The garden went on to receive an RHS Silver Medal which was awarded to the two winning design students. 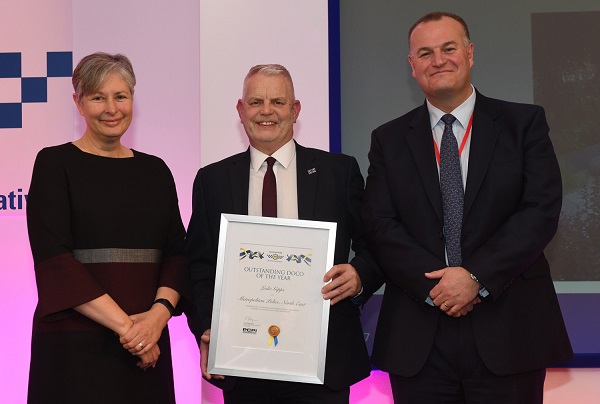 In his latest venture, Leslie has been committed to bringing the Metropolitan Police and SBD to the Ideal Home Show at Olympia London, from 27 March – 13 April 2020 where the Future Living Home in the show’s central mini-village will show off crime prevention measures and techniques. Police officers and representatives will be on hand to explain how the public can benefit. More than 200,000 visitors are expected to attend.

Leslie’s commitment to crime prevention and designing out crime attracted DOCO of the Year nominations from several individuals and even from one SBD member company – Premier Security and Fire Consultants, of Ilford, Essex, which produces the latest generation of steel doorsets, gates and screens.

In a glowing tribute, Premier praised Leslie for using his ‘incredible level of expertise and hard work’ as a DOCO to engage with designers, construction companies and manufacturers to emphasise that SBD is the most important initiative the building industry has to reduce crime.

On Leslie’s advice, Premier designed, manufactured, tested and produced a fire-switch protection unit, which was regarded as a major improvement on existing designs, and has been installed by several London local authorities in their multi-occupancy buildings.

“That level of co-operation is both refreshing and rewarding as we all strive to be the best we can be,” stated Premier.

On receiving his award, Leslie commented: “I’m taken aback and very honoured to receive this award but would not have been able to achieve it without the continued help and support of the Met’s North East DOCO Unit. I’m very passionate about SBD and crime prevention. It’s a pro-active side of policing that has benefits for current and future generations.”

Inspector Matt Turner, of the Metropolitan Police, said: “Leslie is a really good guy with a wealth of knowledge and expertise. The award is well deserved. Leslie does his day job and delivers to a really high standard but also goes above and beyond to deliver additional projects and overcomes any obstacles along the way.”

Lyn Poole, SBD Development Officer, said: “I have known Les for several years and he is always professional and diligent. He is never shy in coming forward and is always willing to find out answers to questions to assist colleagues, the public and the construction industry.

“On behalf of SBD I lent a hand with the Capel Manor Garden and the competition to choose a winner for the RHS garden at Hampton Court. So I have seen at first-hand how dedicated and passionate Les is when he believes in something.

“He has been directly involved in this year’s crime prevention house at the Ideal Home Show. I know it will be a success. The award of DOCO of the Year to Leslie Gipps is well deserved.”