Kent Designing Out Crime Officer Linda Mason was praised for going ‘above and beyond’ in her work to prevent and reduce crime when presented with an award in front of 180 of her crime prevention colleagues from around the UK.

Linda received the first ever Bob Knights Scholarship Award at the annual National Training Event run by Police Crime Prevention Initiatives (PCPI), which works alongside the Police Service around the UK to deliver a range of crime prevention initiatives to reduce crime and demand on police forces.

The PCPI ATLAS 2019 National Training Event was run on the 26-27 February at Cotswold Water Park, Gloucestershire, and was opened with an address from the Metropolitan Police Commissioner Cressida Dick, who spoke in support of the role of Designing Out Crime Officers. 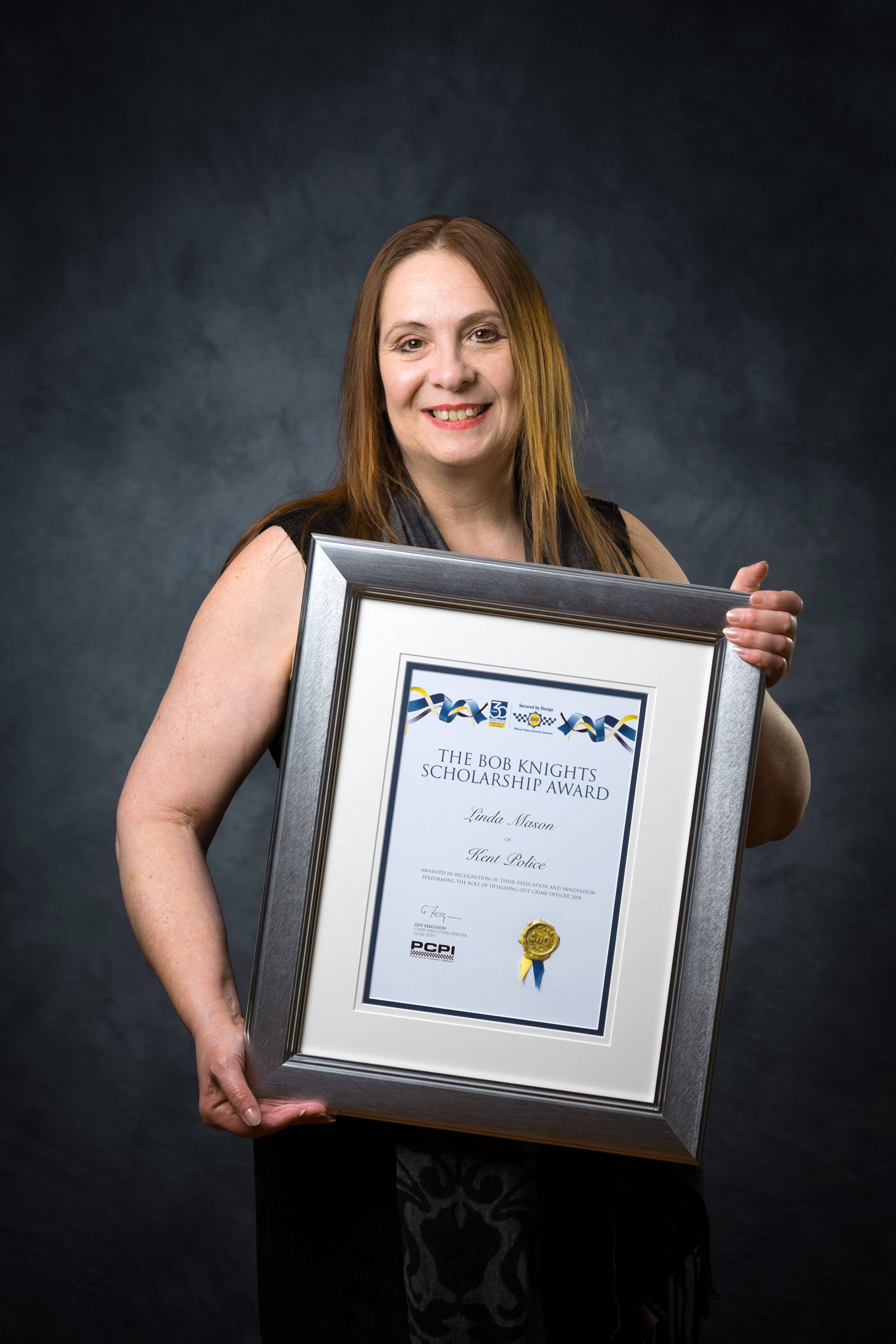 Linda works with architects, developers and local authority planners to design out crime from the planning stage of new developments through to their completion by incorporating crime prevention techniques and measures into the physical security of buildings and their immediate surroundings.

But Linda is also committed to broadening the message to engage with the wider community about the difference designing out crime can make to reducing crime and building safer communities. She is now organising her third seminar in two years for partner organisations and businesses and has embarked on giving talks to young people – from police cadets through to policing students at Christ Church University, Canterbury.

In her citation, Heather Gurden, said Linda has worn ‘many hats’ during her career, including being a local authority town centre manager, to bring her collective experiences together in her current role to design out crime in Kent.

“Linda works tirelessly in promoting the benefits of designing out crime. She goes over and above to highlight, influence and promote the benefits of good design and wider community safety,” Heather said.

Along with Designing Out Crime Officer colleague Adrian Fromm, Linda works within the Public Protection and Partnerships Command to cover the whole of the county.

Asked about receiving the award, Linda commented: “I was astounded, astonished and absolutely delighted to receive this award. I am not the sort of person to plod along. I need to push the boundaries because that’s what you have to do sometimes to make a difference.

“The more you work with different organisations, the more you tell them about the benefits of the service you are providing and the more the message gets out there, the more people learn about designing out crime and want to be involved. I accept this award on behalf of our team and colleagues.” 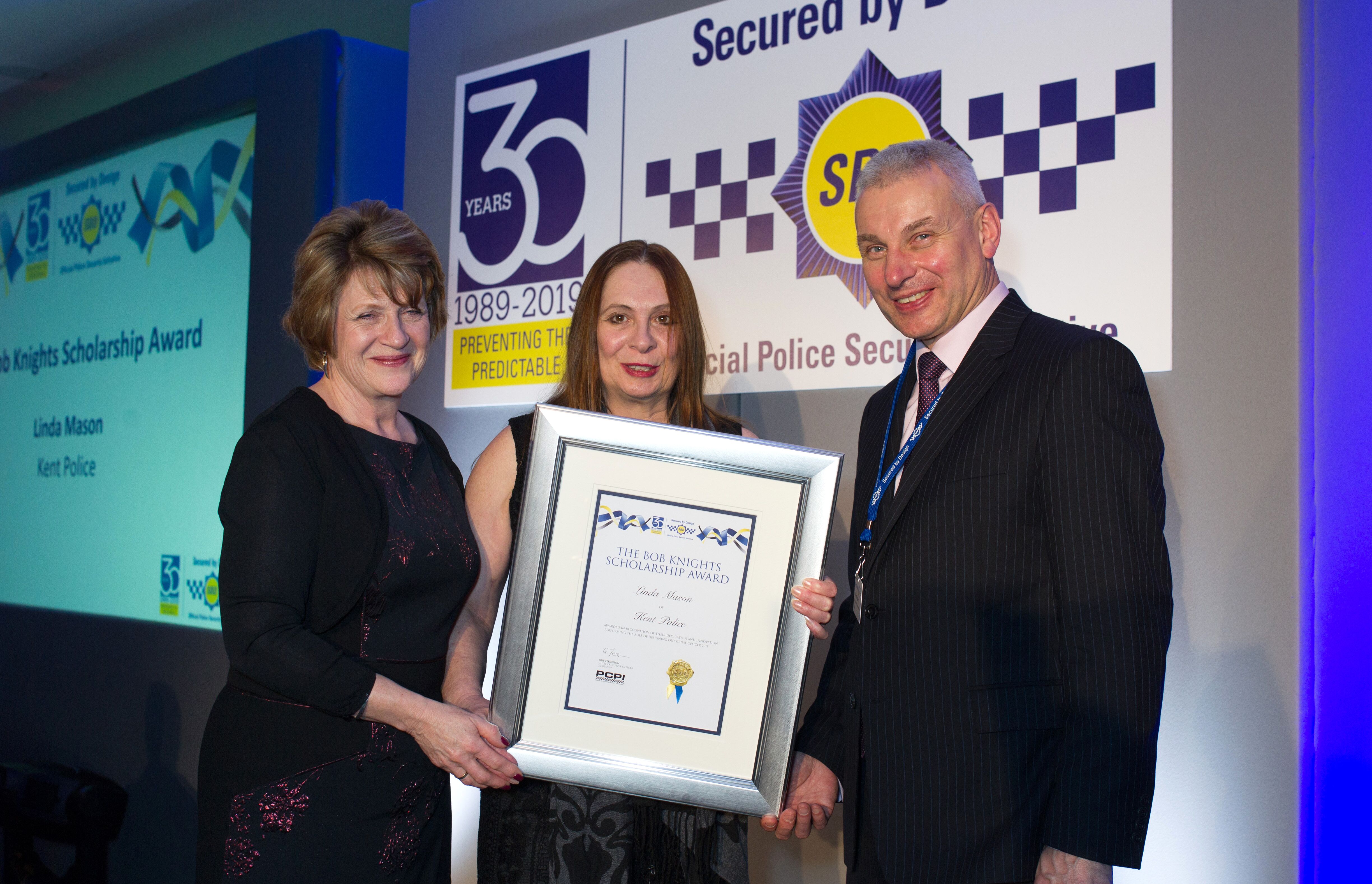 Linda’s certificate reads: “Awarded in recognition of dedication and innovation” in the role of Designing Out Crime Officer 2018.

Since the award, the Designing Out Crime team in Kent have been provided with a second member of police staff to provide them with administrative support one day a week.

PCPI is best known for its Secured by Design initiative, which is celebrating its 30th anniversary this year. During this time, more than one million homes have been built to police crime prevention standards – approximately one-third of all new homes – with reductions in crime of up to 87% every year in the lifetime of those developments.

The Scholarship Award is in memory of Robert (Bob) Knights, who died in 2018 after serving as both a front-line police officer and in the crime prevention role of designing out crime. He became a staunch advocate of Secured by Design from its earliest days and recognised the need for training and development in this specialist sector. The bursary award has been designed to support an existing Designing Out Crime Practitioner and give them the opportunity to continue their professional development by undertaking the Level 5 Diploma in Designing Out Crime. The award will be given each year to a Designing Out Crime Officer who is acknowledged as being an advocate of designing out crime.