Security measures that can help protect your home and possessions from burglary were presented to 30 Police and Crime Commissioners in London on Wednesday, 1 November, by Secured by Design (SBD), the national police crime prevention initiative.

The talk was introduced by SBD’s Chief Executive Officer, Guy Ferguson, who is a former Detective Chief Superintendent with the Metropolitan Police.

He said SBD had a network of 200 police officers and staff in Police Forces around the UK, who work with architects, developers and local authority planners to design out crime on new build developments and major refurbishments, often from the planning stage, through to construction.

This work includes police advising on the layout and landscaping, such as maximising natural surveillance, creating defensible space and limiting excessive through-movement, as well as improving the physical security of buildings to include the installation of doors, windows and locks to SBD’s Police Preferred Specification standard so as to be sufficiently robust to resist physical attack from opportunistic burglars.

Mr Ferguson told the audience that independent academic research has found that these SBD measures can reduce crimes like burglary by up to 75% for new-builds and 63% for refurbishments.

Separate research released in September 2017, involving 3,000 Kingdom Housing Association homes, designed and built to SBD crime prevention standards, on more than 150 developments in Fife, Scotland, over the last 20 years, had shown that crime had decreased by 87% in these areas, he said.

These results showed how crime can be reduced at a time when police and council resources were under pressure. “We are determined to drive down crime for the benefit of residents and to help the police by enabling them to concentrate their hard-pressed resources on other urgent priorities.”

Metropolitan Police Officers Martin Hubbard and Kevin Hook described how homes could be made more secure and less attractive to criminals.

For example, boundary measures could include limiting the height of a front hedge to no higher than one metre to increase the view from dwelling into the street; a rear and side boundary fence of 1.8 metres high topped with trellis of 0.3 metres would make it difficult to climb over; and defensive planting like climbing roses could discourage access.

Doors and windows of the main residence, conservatory and any outbuilding that has been turned into an office should be of an SBD Police Preferred Specification, or similar, to resist physical attack. Front doors should have a spyhole and door chain, and letterbox security could be enhanced with internal cowls to prevent ‘fishing’ through the letterbox and with devices to prevent fires being started this way.

Upstairs windows should be protected with security film or laminated glazing, if they can be reached by climbing from bins, garden furniture, pergolas or from flat roofs. Sheds should have a least two quality and sturdy locks and ladders should be locked away in sheds or garages ideally.

A gravel drive would help you hear someone approaching the property, and dusk-to-dawn external lighting, CCTV and alarms from reputable firms would provide added security. “You need to look at your home in the same way as a potential offender to see what steps you need to take,” said Kevin Hook. 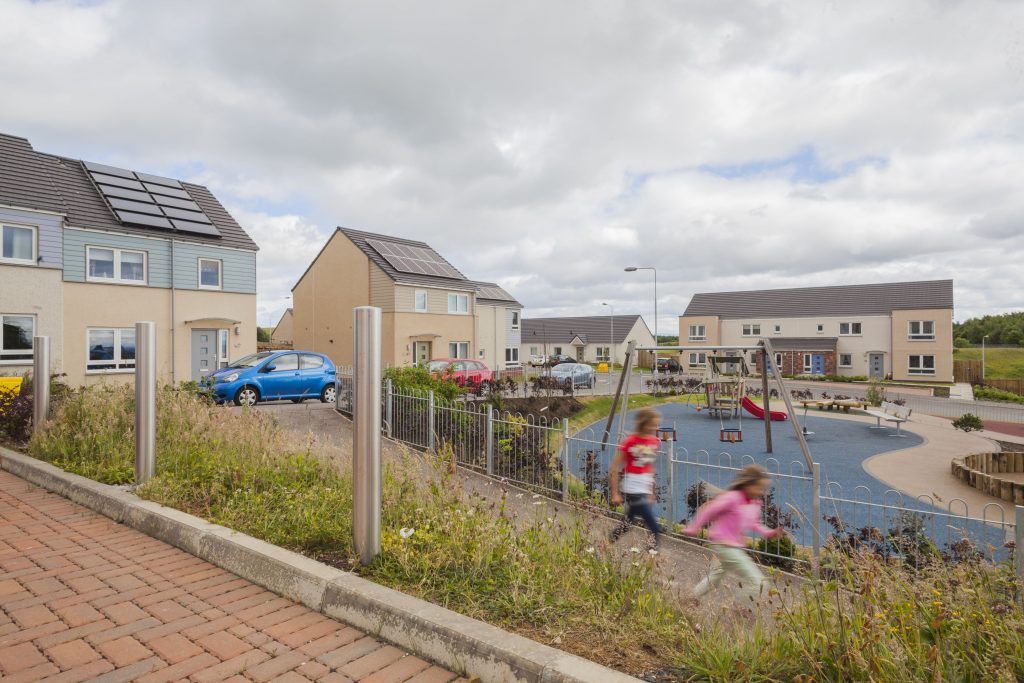 One of the Kingdom Housing Association developments in Scotland after regeneration