A spray with a unique marking code being used by police to identify criminals riding mopeds and motorcycles, is being supplied by Selectamark Security Systems plc, a company accredited by Secured by Design (SBD).

A number of Police Forces, including the Metropolitan Police, West Midlands, West Yorkshire, Cheshire and Surrey Police, are finding the company’s DNA spray technology is resulting in arrests due to the fact that it indisputably links offenders to the vehicles they are using to commit offences.

The operational use of the technology is a huge bonus for police across the UK who are facing an increase in crime and anti-social behaviour from offenders on mopeds and motorcycles.

Recently an 18-year-old male offender from Pontefract, West Yorkshire, was arrested at his home after police used a UV lamp to reveal the DNA spray on his hand and clothing, which linked him to the vehicle he was riding. He was successfully prosecuted and sentenced to 15 months in prison (suspended for 18 months) and received a curfew for two offences of dangerous driving and driving without a licence.

It was West Yorkshire Police’s first use of the SelectaDNA Defence Spray. The Force has seen an impressive 32% reduction in off-road crime in areas where the spray project has been piloted since the summer.

The Metropolitan Police in London is using DNA ‘tagging’ spray along with a number of tactics to combat moped crime and violence, including the use of scrambler bikes and mobile stinger devices to deflate tyres.

Every canister of the spray contains a unique chemical signature giving officers the ability to link offenders to their vehicles after using the spray.

James Brown, Managing Director of Selectamark, said: “We are constantly evolving the use of our synthetic DNA to assist police in the fight against crime. This is a great example of how our innovative technology is helping police forces, including the Met, to catch criminals and remove anti-social offenders and dangerous drivers from our streets. It only takes a tiny drop of DNA Spray to tag and identify an offender and this tactic will undoubtedly lead to more seizures and prosecutions.”

More than 20 of the company’s range of hi-tec security products have been accredited by SBD, the national police crime prevention initiative, including vehicle marking systems ranging from quad bikes, scooters and motorcycles through to cars, caravans, motorhomes and marine and watercraft.

About SelectaDNA Defence Spray
SelectaDNA Defence Spray is used to deter and prevent personal attack and criminal behaviour such as moped and motorcycle enabled crimes. It can be aimed by officers at suspected illegal and anti-social scrambler bikes, as well as at mopeds and motorbikes involved in other crimes such as robberies, assaults and smash and grab raids. The DNA spray marks the bikes, clothing and skin of any riders and passengers with a uniquely-coded but invisible DNA that will provide forensic evidence to link them to a specific crime.

About SelectaDNA
SelectaDNA, the global leader in forensic marking, offers a full range of property, infrastructure and offender marking solutions, using a completely secure and unique synthetic DNA technology. SelectaDNA has been proven to reduce theft and burglaries by up to 83%. SelectaDNA not only reduces crime but also enables police to link criminals to crime scenes and secure convictions. SelectaDNA is available in a number of formats including a solution to permanently mark valuable assets such as electronic equipment, tools, plant and machinery, and an intruder spray to deter commercial burglaries and robberies. 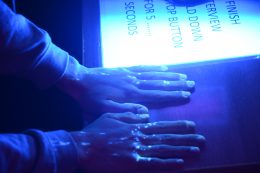 How to spray shows up under UV light 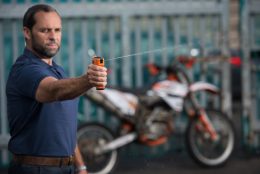 West Midlands Police use the spray