A ‘stalwart advocate’ of crime prevention and designing out crime, Gerry Brophy, of Hertfordshire Constabulary, has won a Lifetime Achievement Award from Secured by Design (SBD), the national police crime prevention initiative. 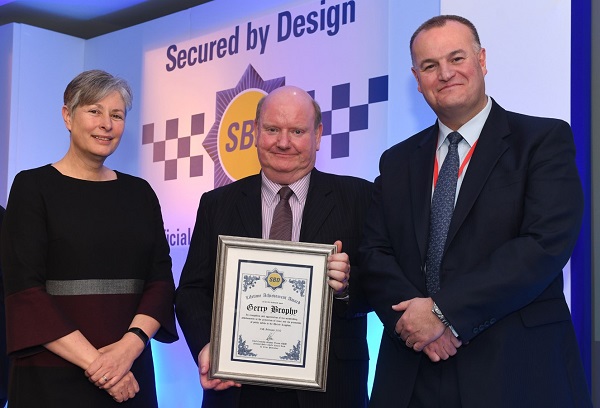 Every police force around the UK has DOCOs who work with architects, developers and local authority planners from the planning stages through to construction to incorporate SBD’s proven crime prevention and designing out crime measures and techniques into the physical security of buildings, such as robust doors, windows and locks, and into the layout and landscaping of the surrounding area to maximise natural surveillance, create defensible space and to limit excessive through movement. These measures combine to deter and reduce crime.

More than one million homes have been built to SBD standards with reductions in crime of up to 87% every year in the lifetime of that development – that’s good news for residents who live in those homes and for hard-pressed police forces, which are able to prioritise their resources where they are needed most.

As Principal Crime Prevention Design Advisor for Hertfordshire, Gerry is widely admired and respected for his work ethic, passion and professionalism as well as his wealth of practical experience and technical knowledge in designing out crime to improve the security of new developments and major refurbishments.

Among his many achievements, Gerry has designed a crime programme to record the tangible reductions in local residential burglaries which have resulted from implementing SBD crime prevention measures and techniques – information that is shared regularly with Hertfordshire’s Chief Officer Group achieving continual awareness of the importance of SBD and the role of DOCOs.

He has assisted on a number of projects and simplified documentation to provide greater understanding of new work strands, such as the Places of Worship funding.

He has combined being a ‘wonderful ambassador’ for his constabulary with being a dedicated mentor to his work colleagues. Gerry has always been ready to take time out to review architect drawings and other planning documents as well as be on hand to encourage and support new DOCOs – providing guidance and reassurance.

Gerry has been a keen supporter of the eastern regional technical committee and the region’s commitment to Continued Professional Development (CPD) learning and training.

In October 2019, the eastern region hosted SBD’s first regional CPD Conference and Exhibition, which was entitled ‘Building in Success – Preventing the Predictable’ at Colchester United Football Club in Essex. It was hosted on behalf of six police forces, including Hertfordshire and attended by more than 200 representatives from the design, planning and construction sectors.

On receiving his award, Gerry commented: “When I heard my name being called out, I was surprised, honoured and humbled to have the appreciation of people who I hold in such high regard. I love doing what I do – it’s as simple as that – and I believe in it passionately because when we get it right, our developments are there for the benefit of current and future generations.”

Gerry, who has been in the Police Service for 42 years – 31 in the Metropolitan Police and 11 in Hertfordshire, added: “In Hertfordshire we do get incredible support from our senior officers and it’s truly lovely to have this recognition.”

Detective Chief Inspector Chris Treadwell, who leads on Crime Reduction for Hertfordshire Constabulary, said: “Gerry is extremely deserving of this award. He has a wealth of experience designing out crime and is always willing to share his knowledge with anyone, often taking time out of his day job to do so. He has led on a number developments across the county leaving a legacy that will long be remembered.

“The work of DOCOs amongst the local community often goes un-noticed. However, Hertfordshire Constabulary recognises the significance of such resources to improve residents’ quality of life through reduced crime. Gerry optimises this in his work and I am proud to have him as a member of my team.”