Two co-located newly built primary schools, which were designed to incorporate proven police crime prevention techniques into the layout of the site and into the physical security of its buildings, have been heralded a major success by Police Scotland.

The Aitkenbar and St Peter’s Primary Schools, which are part of the new Bellsmyre Education Campus near Dumbarton, opened their doors in November 2016.

Since then the schools, which used to receive police visits in response to incidents at their former sites, have not fallen victim to any reports of crime like theft or anti-social behaviour, such as graffiti or vandalism.

The combined school site includes the strategic deployment of high, climb resistant barriers, fencing and gating supported by CCTV and motion sensors to trigger alerts. There is an absence of external door handles with many doors opening using a push bar from the inside.

The sweeping steps at the front of the building lead into reception, which is shared by both schools, with further access limited through secure doors into either school.

These security features and others built into the campus are the work of Secured by Design (SBD), the national police crime prevention initiative, which has a network of around 200 police staff and officers around the UK.

These officers work with architects, developers and local authority planners to ‘design out crime’ at the drawing board stage through to construction on new build developments and refurbishments throughout the UK in a wide range of building sectors such as housing, commercial, transport, health and leisure as well as education.

The £9.3million facility, which also includes the Bellsmyre Early Education and Childcare Centre, was officially recognised for its safety and security standards when Inspector Scott Carlin and PC Dale Logsdon presented the schools with their official Secured by Design Certificates.

Inspector Carlin said: “The previous school sites fell victim to crimes, such as vandalism and anti-social behaviour, and the idea behind Secured by Design is to build facilities to a standard that helps to prevent these kinds of crimes. And so far, that is working very well here at Bellsmyre.

“It’s about creating a safe and secure environment for children and staff. The most important thing is that the school is welcoming and that is certainly the case with this building.” 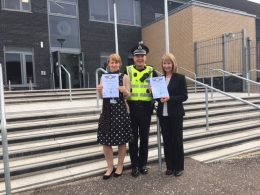 The additional cost in ensuring a building meets Secured by Design standards can be quickly offset, explains Inspector Carlin. He added: “With the fencing and security measures in place, it will reduce the need to spend as much money on graffiti removal or repairing damage to the building. It’s about spending money to save money."