Secured by Design (SBD), the national police crime prevention initiative, sponsored the ‘Best Community and Neighbourhood Initiative’ - one of more than 20 Service Awards - presented during the Association for Public Excellence (APSE) Conference in Oxford on Thursday, 7 September.

SBD’s Senior Development Officer, Mick Reynolds, was on stage when the award was presented to Swale Borough Council for a scheme to encourage dog walkers to pick up after their pets.

The APSE Awards recognise excellence in local government services across the UK and are open to all local authorities and their public sector partners. The winners of the awards demonstrated that they are actively implementing innovative ideas, supporting continuous improvement, and developing new strategies to deliver local services whilst also highlighting their commitment to innovation and adaptation in local services.

Swale Borough Council’s TiksPac scheme involved 30 ‘stations’ being installed at popular dog-walking locations across the borough, to provide dog walkers with free dog waste bags to pick up after their pets. The scheme is funded by local businesses advertising on the stations, which not only brings them increased exposure to potential customers, but also demonstrates their support for improving the local environment.

The awards were presented by Louisa Preston, broadcast journalist for BBC London and BBC Breakfast.

Delegates at the awards saw the premiere of the APSE and ITN Productions’ new programme ‘Redefining neighbourhoods, Beyond austerity’. This programme explores the current challenges that local authorities face in providing services during a restrained financial climate.

SBD has a network of police officers and staff, known as Designing Out Crime Officers, in Police Forces around the country. The film shows how one of these officers has been embedded within the Community Safety Team at Epping Forest District Council. This team gets together with planning and housing officials prior to planning application stage to consider how all new developments submitted by independent and commercial builders can achieve SBD standards of security. These standards cover both the built environment, such as layout and landscaping, and the physical security of buildings, such as external doors and accessible windows. 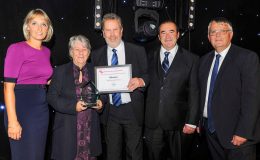