A development of six new council homes at Gorleston-on-Sea, near Great Yarmouth, has received an award from Secured by Design (SBD), the national police crime prevention initiative.

The SBD Gold award recognises that proven crime prevention techniques have been incorporated into both the built environment, such as the layout and landscaping, and the physical security of the new homes, such as doors windows and locks.

On Wednesday, 10 January, 2018 representatives of the Council and Equinox Enterprises, together with builders, Wellington, marked the opening of the Robinson Close development, after ten months of construction work.

Following a recruitment process co-ordinated by the Council’s Neighbourhoods that Work Project, a local unemployed man, was offered a 13-week work experience placement on the project, which saw him taken on by Wellington as a labourer. In addition, a young man who grew up on the estate, was employed as a bricklaying apprentice on the project. 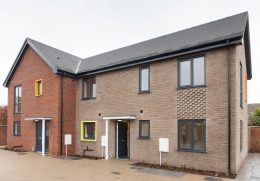 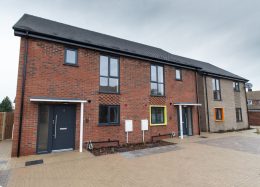 One of the Council’s priorities is to create an attractive mix of good quality housing that will be fit for purpose for all, and meet both the borough’s existing and future needs. The new properties have been allocated to tenants through the Council’s Housing Options Service.

Other measures included good open surveillance overlooking public spaces and a long entrance roadway as well as the avoidance of pedestrian short-cuts through the development to encourage the feel of a private area and further discourage criminal activity by increasing the chances of strangers being spotted and challenged.

Nick Dean, Deputy Chief Constable, Norfolk Constabulary, said: “It is important for police to work with local authority planners, architects, developers and builders at the outset to build in proven crime prevention measures to reduce crime and keep people safe.

“Independent academic research shows that incorporating these measures into the landscaping and physical security of new homes can reduce burglary by up to 75%. That makes a huge difference for residents and for local communities. Crime prevention is a priority for the police service and this initiative is one example where working in partnership makes a huge difference.”